AFTER a gap of a year due to the Covid restrictions the Sigerson Cup returns where in the first round the 2020 semi-finalists, IT Carlow, take on Letterkenny IT on Tuesday next. There is a huge incentive for the Carlow teams to advance as both the Sigerson and Fitzgibbon cup finals will be held in Carlow in February.

When these sides met two years ago it was drama all the way. With twelve minutes to go Evan Lowry scored a goal for Carlow which put them into a match-winning position. With time almost up the Donegal college found what looked to be the decisive goal. Incredibly Carlow held their heads, worked the ball up the field and Adam Steed proved to be the match winner when finding the net from close range. 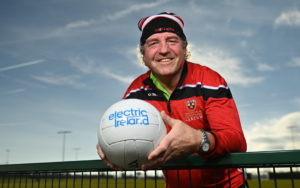 The former Laois dual star is still in charge in Carlow. He points out that matches are coming a little bit more quickly than he would like.

“It has been very difficult. The split season was late starting and a lot of players were involved with clubs. The county set-ups were getting up and running. The under 20s too. It has been very hard to get all the lads together but we were saying it was the same for everyone,” he said.

“There complications with Covid too. We were down to play a practice match last week but we were missing a number of players. Hopefully we can pick from a full deck for this game. You don’t know. You are only going from day to day with it.”

Assuming players get through intercounty commitments and avoid Covid either through infection or close contact Critchley will be able to call on an experienced side.

“There is continuity. We have players who were there two years ago. Hopefully we will be able to pick from a full team and put in a performance. Josh Moore, Conor Doyle, Podge O’Toole, Conor Griffin, Gearoid Murphy and Cillian Roche in goal, have the experience from that semi-final but Cian Farrell, a key forward is out. The sharp-shooter picked up a cruciate problem during the Offaly championship. To off-set that, Joey Wallace, who scored the winning goal for Ratoath in the 2020 Meath senior football championship final is available.

From a local point of view Josh Moore of Rathvilly is having the time of his life on a football field. There was that Sigerson Cup final appearance two years ago while he won a SFC winners medal with Rathvilly this year. The Wicklow border club were making amends for losing the delayed 2020 final to the same opposition only months previously.

“I took a lot from the Sigerson Cup final two years ago. Obviously we didn’t get over the line but you still learn from those type of games and you bring that on to the next game.”

Moore is clearly able to roll with the punches and can take disappointment firmly on the chin.

“We didn’t beat Éire Óg the first time we played them but we learned from that and got over the line. Even though you don’t win you still learn.”

Deadly rivals not so long ago Moore and his fellow Rathvilly man, Conor Doyle will, injury permitting, line up beside the Éire Óg pair of Mark Furey and Colm Hulton.

“There is a bit of craic between us. Hopefully we can come together and get over Letterkenny in the first round,” says Moore.

Elsewhere, Éire Óg’s Jordan Morrissey is likely to feature as DCU begin the defence of the title they won in 2020 when they take on Kildare’s Maynooth University on Tuesday at 7pm. DCU warmed up nicely for the Sigerson Cup when, with Morrissey at centre back, they beat NUI Galway in the final of the Ryan Cup last week. Palatine’s Conor Crowley is also involved with UCD team who play MTU Kerry Campus on Wednesday afternoon at 2.30pm.

Carlow’s out to break Louth’s Harte