IT Carlow missed out on a great chance to record a first round win in the Sigerson Cup when Letterkenny IT scored 1-3 in the closing stages to stage a dramatic comeback at Dunganny on Tuesday night. 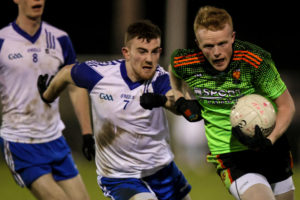 Conor Doyle of IT Carlow holds off the challenge of Letterkenny’s Jack McSharry
Photo: ©INPHO/Ben Brady

It was some sort of revenge for the Donegal side after they were on the wrong end of a dramatic Adam Steed winning goal in the 2020 semi-final.

Steed looked to be the matchwinner again for Pat Critchley’s team after his goal with the last kick of the first half separated the teams for most of the second half, until LYIT hit their late scoring burst.

To be behind at half time was harsh on LYIT as they created more opportunities during the first half but they were let down by some wayward shooting.

Jason McGee opened the scoring from a 45 for LYIT before Evan Lowry and Conor O’Donnell traded scores.

There was then the remarkable sigh of IT Carlow goalkeeper Killian Roche joining in with play out the field and the 12th minute attack ended with the Killeshin clubman shooting wide from play from around the 45 metre line.

Although Gearoid Murphy pulled back a point for IT Carlow in the 24th minute, it was a difficult spell in the game for them and they were soon two points behind again when McGee converted a free.

Unfortunately for them, their shooting wasn’t as good as their build up and IT Carlow punished them in the final stages of the half. Evan Lowry converted a free, and then set up Murphy for a well taken equalising score.

The most important moment of the half came in injury time when LYIT were caught overcommitting men to attack. Darren McDermott did well to win possession despite being out numbered in the middle of the field and sent a long ball towards Steed where he and his marker were the only players inside the 45. With the ball hanging in the air, there was the option of collecting a mark taking an easy score but Steed sensed blood. He gathered the ball, held off his man and blasted the ball past Maguire with what turned out to be the last kick of the half, leaving IT Carlow 1-4 to 0-4 ahead at the break.

That goal gave IT Carlow a nice buffer through the second half and with Lowry and Murphy continuing to keep the scoreboard ticking over, a Letterkenny comeback never really looked on the cards.

When Murphy scored his fourth point of the game with another really well taken shot to put IT Carlow four points clear in the 57th the game seemed set to fizzle out for a relatively comfortable win for the 2020 runners-up.

However, once Keelan McGroddy rounded off a flowing move that went from one end of the pitch to the other, the game completely flipped. IT Carlow couldn’t get their hands on any ball around the middle of the pitch, couldn’t keep possession from their own kick out and couldn’t get out of their own half.

Points from Gaughan, McGee and Rory O’Donnell followed as LYIT pulled away from a shell-shocked IT Carlow.

Despite the nature of this defeat, IT Carlow remain very much in the competition. Next Tuesday, they will host an IT Sligo side were beaten by 20 points by University Limerick.

Filed under: IT Carlow, Sigerson Cup