SHE describes herself as a Dub living in Carlow. She plays out of the Sharkx Academy in Newbridge. Annette Newman lives in Cranlusky near Ballinabranna but wherever she is from Annette Newman, the Irish billiards champion and the world number two, has had and continues to have an extraordinary sporting career. Since winning her first senior billiards national title in 2015 she has completed a fabulous seven titles in a row and is all but unbeatable in Ireland. Only once in 31 ranking events in Ireland has she not won. At 61 years of age she has every intention to keep on playing. 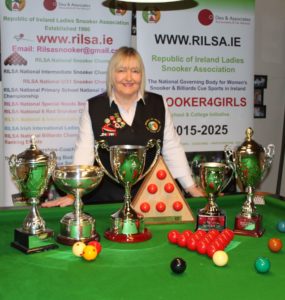 “I am about 14 years living in Carlow. I played snooker since I was 18 and then Dan (Carroll) introduced all the ladies to billiards in December 2015. Since then I am hooked. I love it,” she proudly says.

She is getting married this year to Dan who is Chairperson of the Republic of Ireland Ladies Snooker Association (RILSA).

Her fiancé is from Tipperary but is living in Carlow. From a sporting point of view they are based in Newbridge. The RILSA have an equal partnership with Snooker and Billiards Ireland who have a room off the Portlaoise Road in Carlow. Sharkx Snooker is definitely the spiritual home of Annette from where she has dominated the sport in this country. She is working in the Hillview Nursing home since 2011.

Before concentrating on billiards Annette won 16 snooker ranking events. Recollections of her snooker achievements have all but gone now she claims.

“I can’t remember what I have won. I haven’t a clue. I know I have won a lot but have done so well with the billiards since I started,” she says.

She is coached by Aidan Murray who, in 2019, became the first Irish coach to become a world billiards coach.

“We would be lost without him,” says Annette who articulates the difference between snooker and billiards.

“You are trying to rein in your cue ball in snooker and keep it under tight control. In billiards you are looking to get cannons and moving the ball around. It is a great game.”

According to Annette there is also another difference.

Annette’s progress on the world stage has been meteoric. She participated in the Irish Open last year which is a world ranking event. She did brilliantly getting to the final where she was beaten by the current World Champion Anna Lynch from Australia. Seven weeks later they met again. This time at the Irish Masters. Here Annette came close to taking the win only for her opponent to finish strongly to seal victory. With Annette climbing the world ranking to number two this was the first time any female cuest in either snooker or billiards player from Ireland has been ranked so high. Prior to this, snooker player, Margaret O’Driscoll was number 10 in the world in the early 90s and Julie Kelly was ranked seven around the same time.

Annette is not driven by awards.

“I didn’t realise I would love it as much as I do. I would have to say I am more interested in billiards now than I am in snooker. Aidan Murray has been a great help to us showing us all the different type of shots. It is all practice after that,” she says.

“I think if you are interested in something, work hard at it then you can get really good at it. There is no pressure. We just love the game. We have a great coach in Aidan,” confirms Annette.

“We have lovely tables in the Sharkx club. We have everything going for us.”

Covid has limited Annette’s ability to travel abroad. Playing the game’s ranked number one player to Newbridge was a career highlight for Annette.

“To do so well against the world champion I was thrilled with that. I played well and she is a great player so I was delighted. I gave it my best shot and I am looking forward to playing her again this year when we hold the world women’s billiards championship in August at Sharkx,” she says.

She doesn’t have a full-size table at home but that doesn’t deter her. She was glad to have it during the lock-downs.

“ I have a 10 by 5 table in a shed. It serves its purpose. If I come home that doesn’t mean I go out there to play. It is nice to have it out there and especially when we couldn’t go anywhere. I am very lucky to have it. It is not full size and it gets the cue arm going.”

Despite her past successes Annette still has her ambitions.

“I would love to win the world championship this year. That would be a biggie. I will enjoy playing in it. I won’t mind if I lose but I am going to do my utmost to win.”

After that, as President of the RISLA, she continues to promote the sport. Among other things practice tables have been distributed to schools. She says Jennifer Earle is one of the upcoming stars and there are others close behind. She looks up to the current World Number 1, Anna Lynch from England.

Her inspiration to play snooker came from watching Jimmy White.

2019 was her most successful year where she won four majors including the national championship in the one year. Her appetite for the game is as strong as ever.

“I hope to continue doing well. I don’t expect miracles. I will keep enjoying myself and will encourage the younger girls. We are very much involved at all levels and the game is becoming more popular all the time.”

30 National Billiards Ranking event titles out of 31 held to date.