AFTER ten weeks out of the game through injury the future is looking brighter than ever for former Carlow rugby player, Tom Daly, who signed a new two year contract with Connacht over the Christmas period. 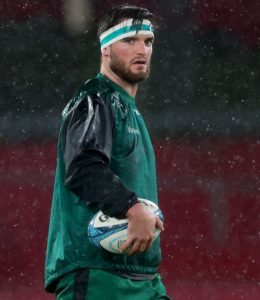 Tom Daly has signed a two year extension to his Connacht contract, and hopes to be back on the pitch by the end of January following a knee injury
Photo: ©INPHO/James Crombie

The centre had picked up the injury when the Westerners beat Ulster 36-11 in the United Rugby Championship (URC) last October. It should have been a game to remember for Daly but having torn ligaments in his knee he knew he was going to be out of the game for a lengthy spell.

With his current contract due to expire at the end of the season he was a little worried. Then a request to meet the team manager dispelled any doubts that the centre might have had.

“Pretty early on Andy Friend called me in for a chat. He said I was one of their priority players and he wanted me to stay for another couple of years. We obviously agreed on a contract over the next few weeks. It is nice to have it out of the way and I don’t have to worry about it for two and a half years,” said Daly.

The Carlow man moved from Leinster to Connacht three years ago and while he would have been disappointed to be leaving his native province, in hindsight now, he knows the move was perfect for him. This new contract means he can concentrate completely on getting back to full fitness and playing a full part for the rest of the season in the Connacht jersey.

“I am nearly back now. I will be back training this week or next week and should be playing by the end of January,” he predicted.

“It is lovely to sign. It is a nice bit of security for the next two years. I am enjoying my time in Galway. Things are going well for me up so it was an easy decision to make and to stay here.”

No doubt he would have loved to have played for Connacht when they beat Munster in the URC competition on New Year’s day. Now he knows there will be further opportunities to play against the best club teams in Europe.

“I have three to four seasons to look forward to with Connacht and it is good to have it done nice and early. It can be stressful enough when you are looking for a contract or trying to sort one out.”

Even though he had a few extra days at home with his family over the festive period in Ballon, he says he did all he could do to get back to full fitness as quickly as possible.

“It was nice to get home for the week over Christmas but you are training just as much in rehab with the strength and conditioning coaches. Obviously, you have to work your way back up to fitness by doing your own programmes with the coaches. You integrate into team sessions slowly and then back into games.

“It has been a tough 8-10 weeks out and I am looking forward to getting back fully.”