NIALL Carew has named a new look Carlow team for this evening’s clash against Kildare in Netwatch Cullen Park (throw in, 7.30pm).

No less than ten players will be pulling on a Carlow senior jersey for the first time as Carew deals with retirements, injuries, and college commitments. 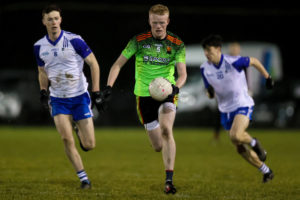 Conor Doyle is named at centre back for Carlow for tonight’s O’Byrne Cup tie against Kildare
Photo: ©INPHO/Ben Brady

Youngster Dara Curran, a county minor in 2020, is rewarded for his performances in Rathvilly’s Championship win, while Fenagh duo Keagan Bradley and Cormac Lomax are drafted in at either end of the field. There is also a call up for Henry Hegarty after he starred for Grange on their way to winning the Junior Football Championship title last year.

Shane Buggy caps a meteoric season for him. He was a substitute on the Carlow U20 side last summer and only made his senior Championship debut for Éire Óg as a late substitute in the final defeat to Rathvilly. In between that, he did star for the Éire Óg intermediate team as they won that Championship.

Josh Moore is named at number 10 but he picked up a knock while playing in the Sigerson Cup for IT Carlow on Tuesday evening and will be assessed again closer to throw in. If he can’t take his place in the starting line, Leighlinbridge’s Liam Brennan will take his place.

“We are training hard. Lads are putting in big shifts. There are a few lads still trialling. We will see how they get on in the O’Byrne Cup,” said Carew.