IT’S not too often that a manager will declare himself pleased after a 18 point defeat but Niall Carew knows that his Carlow team are swimming in a very different pond to his native Kildare.

Under new manager Glenn Ryan, and with an eye on a game against Kerry in the first round of the National League in little over two weeks, Kildare ruthlessly cut through Carlow at times on Thursday evening in the O’Byrne Cup and helped themselves to four goals in the process.

But there were plenty of positives for Carew to take as well. Recent top scorer Paul Broderick is one of number of players who have stepped away from the panel so there is an onus on those in attack to step up and replace the scores that he has delivered so consistently in the past.

From that point of view, it was very encouraging to see Conor Crowley torment Kildare during the hour that he was on the pitch, just over 24 hours after he lined out for UCD in the Sigerson Cup. Crowley scored 1-2 and was also very unlucky not to get a second goal in the second half when his shot clipped the post. There were signs of an understanding with Darragh Foley and Carlow’s potency in attack increased once Colm Hulton was introduced at half time, and he added three points from play.

“We knew it was going to be a difficult task,” said Carew.

“Kildare are a Division 1 team and they proved that tonight. Especially there in the middle eight, they overran us a good few times. We did cause them a lot of problems with Darragh Foley and Conor Crowley, I felt, and we brought on Hulton in the second half. We’re missing the likes of Sean Gannon, Jordan Morrissey, Ross Dunphy, we can go on and on but it’s about the lads who there tonight,” he added. 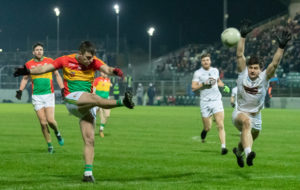 Colm Hulton scores one of his three second half points
Photo: michaelorourkephotography.ie

That was one end of the field but of course there are concerns on the defensive end of the field. Big, strong defenders like Shane Redmond, Daniel St Ledger, John Murphy and Conor Lawler are all now unavailable for different reasons so Carew was pleased to see some young players step up in the face of real pressure from some quality Kildare players.

“We had nine or ten lads starting there playing for Carlow for the first time, and I suppose another three or four coming on.

“Shane Buggy was excellent at wing back, and he’s only after burying his grandfather there the other day, and I thought Dara Curran at corner back was excellent. They are only 19, 20 years of age so they were two big plusses for us. I thought Keegan Bradley did well too, he was marking Daniel Flynn who is probably one of the best forwards in the country but he did well on him. Overall, am I happy? Not with the result but I would be happy with some of the aspects of the performance.

“Add in Jamie Clarke, Jordan Morrissey, Josh Moore and Ross Dunphy and then we’re a different outfit,” said Carew. Those four should be available in the short term. He also named Sean Gannon who will take longer to return from injury and Eoghan Ruth, who Carew hopes will be back by the second or third game of the National League. 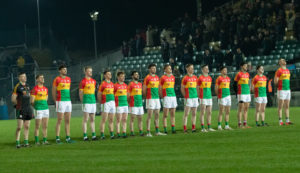 While pleased with the effort of those on the field, Carew pinpointed the middle of the field as area for an improvement.

“We’ve plenty of work to do but there times where I felt we gave a lot of problems. We did get overrun in that middle eight though, Murt (Murtough Ware) did alright in there but that’s an area that we need to work on and get right. We have to realistic about where we are and we know that we have to work very hard to compete in Division 4.

“We are rebuilding, that’s the bottom line. I hope the lads stick at it and stick with it and I think they will. The effort in training has been unbelievable but we just need to keep working harder and smarter,” said Carew, who also sent best wishes to his own county.

“Glenn and the boys have them flying and they’ll need to be with a game against Kerry in a few weeks but they are going well, and I wish them well for the year,” he said.

Carlow were due to play Westmeath on Saturday in the O’Byrne Cup but that game has now been postponed and all the focus is now on preparing for the first round of the Allianz League when London are the visitors to Netwatch Cullen Park on Saturday 29 January.