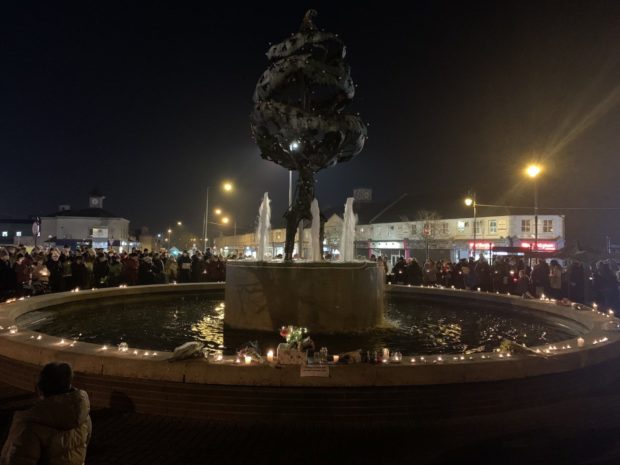 The vigil at the Fountain in Carlow town Photo: Bishop Denis Nulty/Twitter

Hundreds attended a vigil tonight in Carlow town in memory of Ashling Murphy who was killed in Tullamore on Wednesday.

The event was organised by the Carlow Women’s Refuge Campaign following the senseless killing that had shaken communities across Ireland.

Carlovians took to social media to share poignant photos of the event.

A very moving #VigilforAshling here in Carlow this evening. May her gentle soul that brought such joy to so many in her 23 years of life, rest in peace @KANDLEi @OssoryDiocese @CatholicNewsIRL pic.twitter.com/qPxWLMY7pa

Speaking before the event, one of the organisers, cllr Adrienne Wallace said: “This is a shocking and callous act that has brutally robbed a young woman of her life, a family of their daughter and a community of a wonderful teacher. We want to stand in solidarity with Ashling’s grieving family and let them know the country is mourning with them. From Carlow to Tullamore, Ashling is in our thoughts.”