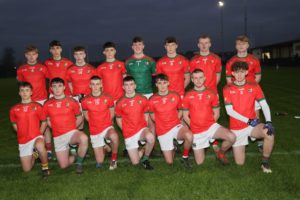 Friday evening was a thriller. From the moment Enniscorthy CBS opened the scoring when Sean Fitzpatrick’s shot was deflected into the Carlow net both sides knew only one way to play and that was forward. Yes there were times when the teams opted for the safe pass and another build-up but overall this was as good an attacking game one could wish to see.

After the away side secured their early goal they came at Carlow in waves. Liam Lynch added a point as their opponents lived on scraps. Ronan Quinlan opened the Carlow account with a 4th minute mark but they were struggling. A point from David Hennebry and two from Liam Doyle put Enniscorthy six clear. It could have been worse for Carlow and they had Sean Murphy to thank when the keeper saved well from Andrew Fitzhenry.

Out of nothing Carlow was handed a life-line when a high ball wasn’t dealt with by the defence and Conor Kelly scored from close range. Quinlan added a point and suddenly the game changed.

Adam McCarron added an opportunist goal when he lobbed the Enniscorthy when a short kick-out went wrong. If the first two goals were somewhat fortunate then the third Carlow CBS goal was quite the opposite. This time the ball was played through the hands at speed with McCarron delivering the scoring pass to Tom Behan who found the net. All was changed from those opening ten minutes as Carlow CBS led 3-4 to 1-5 at the interval.

Three points in succession from Quinlan at the start of the second period stretched the lead to eight points. The eventual winners may have relaxed at this stage and three balls dropped into the Enniscorthy keeper, Paul Burns, drew Enniscorthy on to them and gave the County Wexford side a renewed momentum. Shane Cullen scored an Enniscorthy goal while Fionn Walsh shot just wide.

With time running out Carlow looked to be hanging on to a three-point lead. That almost evaporated but after doing everything right Doyle saw his shot hit the right-hand upright and bounce back into play. This was the small margin between victory and defeat. Carlow made good their escape as Jack Teehan’s goal of the game in injury time ushered his side into the decider.

Colaiste Eoin always looked the most likely side to win this South Leinster SF D semi-final in Hacketstown on Friday but it wasn’t until the final minutes they managed to secure the win.

Four points on the trot from James Whelan in the opening quarter was key for the eventual winners in what was a tense and competitive encounter. Gaelcholaiste hit back with two points from Joshua Mac Aogáin and one from Ryan Ó Caomhánaigh narrowed the gap to the minimum. Colaiste Eoin hit back with a brace of points from Ciaran Harmon and one from Cathal Sheehan.

The rampaging Evin Mac Eochaigh Ó Guaire almost stole in for a goal but Aaron Corless made a vital stop and at half-time Colaiste Eoin held a 0-8 to 0-4 lead.

Mac Eochaigh Ó Guaire found the Colaiste Eoin posts to set up a close second half. Further points from Harmon and Whelan kept a distance between the sides but the game was turned on its head when Daniel Ó Bolgúir latched onto a loose ball to find the net from close range. Now a one-point game it was down to a test of character for both sides. Colaiste Eoin found that little bit extra and two points from Harmon and one from Sheehan saw the home side eke out a victory. They could even afford to miss a penalty late on and held on to their lead to run out deserving winners.