Hurlers bolstered by inclusion of Murphy and Lawlor

THEY were two of the stars of one of the best day in recent memory for Carlow’s football team but Sean Murphy and Conor Lawlor have thrown their lot in with the county’s hurling team instead for the upcoming season.

Murphy turned in a memorable performance around the middle third that day, in the midst of a superb individual season, while Lawlor scored the late goal that sealed the win to spark the unforgettable scenes of celebration. 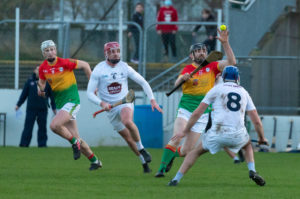 Both men lined out for Carlow during their first game of the season last Sunday, when Kildare were once again the opponents, in the opening round of the Kehoe Cup.

Murphy scored five points in the 1-25 to 0-19 win and was the star player for Carlow up until Marty Kavanagh and Chris Nolan took over the game in the final quarter. Lawlor too brought a steadying influence to the defence.

“Sean showed well, he breaks the line well and he scores points too. They are big men, experienced inter county players and they bring a lot to training as well,” said selector Pat Murphy after the game.

Swings and roundabouts though and Carlow will be without some of the more experienced players this season, like David English and James Doyle, but a number of young players also showed up well in that win over Kildare at Netwatch Cullen Park.

Fiachra Fitzpatrick was playing his first game for the Carlow senior hurlers on Sunday. He has two senior club titles with Mount Leinster but he agreed this was a step up in standard. The last time he was on the Netwatch Cullen Park pitch was with Rangers against the might Ballyhale Shamrocks.

“I enjoyed it thoroughly. It is nice to get back on the field. I haven’t had a hurl in the hand in match situations since we lost to Ballyhale in Leinster. A few things we wanted to put right and put to bed. It wasn’t perfect today. Far from it. It is one step on the ladder,” he said.

He found the step up to intercounty level brought its challenges.

“Probably the intensity in the tackle, the first touch and the time on the ball. It is quicker. They were the main differences. At the end of the day we are playing to a high enough standard. Carlow club hurling is a high standard and everyone knows it.”

His appetite to play on Sunday was whetted three nights previously.

“In fairness the pitch is pristine. I saw it here Thursday night when the footballers were playing and it looked great from the stand.”

“Now that a competitive game is under their belts he hopes more games will follow.

“We haven’t that much hurling done. At this time of year it is all conditioning really. Not much hurling and we will build on it as we approach the league.”

Carlow made seven changes at half-time. Key to the victory was the contribution from two players in particular. Marty Kavanagh and Chris Nolan. Between them they scored 0-12.

“They made an awful difference. They were wise. The ball was coming out quick in the first half. It suited their backs. The boys were clever breaking ball to themselves giving time to the forwards to get up in support.”

Carlow’s second game in the Kehoe Cup is against Meath in Kilmessan on Sunday at 1.30pm.