IT Carlow v IT Sligo

IT Carlow will be hoping to put their first round Sigerson Cup defeat to Letterkenny behind them when they host IT Sligo on Wednesday.

Pat Critchley, the Carlow manager, was bitterly disappointed not to hold onto a winning lead in the first round but says it is a perfect opportunity for the side to make amends. 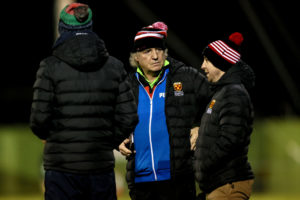 IT Carlow manager Pat Critchley on the sideline in Dunganny last week during this team’s defeat to
Photo: ©INPHO/Ben Brady

“We let it go after a slow start. We did a lot of good things, were well on top for most of the second half and gave away 1-3 without reply,” he pointed out.

Now Carlow go through the back door which is a luxury afforded to them up to the quarter-final stage.

“If we could get the win under our belt it might give us some momentum as we haven’t had too many games up to this,” Critchley said.

He is not reading too much into Sligo’s first round defeat to a strong University of Limerick side.

“We would hope to bounce back if we can replicate the good things we did and learn what we did wrong if we get into a winning position again,” he suggested.

Waterford IT v IT Carlow,

It is two years since IT Carlow experienced the heart-break of losing a Fitzgibbon final to the holders, UCC at the DCU grounds in Dublin. With Covid putting an end to the competition last year the colleges are back and raring to go. On Wednesday, IT Carlow travel to take on Waterford IT in a first round game. One would feel this is a must-win game as they have to travel to DCU for their third and final game of the group stages. Sandwiched in between is an away fixture to Maynooth University who, traditionally, would be down the pecking order at this level.

Yet Carlow have their problems. Kilkenny players, Eoin Cody and Niall Brassil will not be available to IT Carlow manager, DJ Carey who says the nature of college hurling has changed.

The Kilkenny legend can still call on the services of Carlow pair, Chris Nolan and Marty Kavanagh. Seamus Casey and Shane Reck from Wexford are also in the squad as is Podge Delaney of Laois.

A win is vital here. Carlow will be hugely incentivised as the Fitzgibbon Cup final is being hosted by IT Carlow. With this in mind the visitors must surely be further motivated. That will only take them so far though. It is all to play for.

Filed under: IT Carlow GAA