Irish underage star proves too much for Gaelcholaiste Cheatharlach to handle

Gaelcholaiste Cheatharlach were no match for MVP Aivaras Uosis as he scored 36 points to inspire Pobailscoil Chorca Dhuibhne to a 57-34 win in the U19C Boys final of the Pinergy All-Ireland Schools Cup finals at the National Basketball Arena.

Pobailscoil Chorca Dhuibhne opened the scoring with Kiernan Ó Moráin’s three point jump shot and raced to an early 11-0 lead, before Gaelcholaiste Cheatharlach finally got on the scoresheet with 52 seconds left in the quarter through Ben Caomhanach, however it would be 13-2 at the end of the quarter, with the Dingle school stretching their advantage again late on. 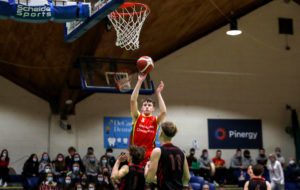 Uosis was keen to get in on the act and he landed a long range three with 1’08 left to put Pobailscoil Chorca Dhuibhne 26-24 up. And the same player’s step back jump shot from the three point line with the buzzer about to go made it 31-26 at half-time to the County Kerry side. Uosis scored 17 points by the break, while for Gaelcholáiste Cheatharlach Conor Ó Duinneacháin and Ben Caomhanach had eight points each. 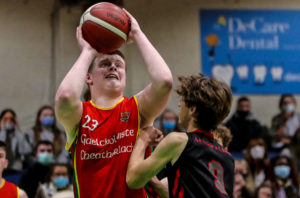 Uosis continued where he left off at the start of the third, with two three pointers in the opening minute or so, to make it 37-26. He followed it up with a layup and two free throws – after Milo Ó Fiacháin fouled while trying to stop him – Uosis’ 10 point run made it 41-26 with a little over three minutes gone in the third. A couple of Conor Ó Duinneacháin baskets helped stem the tide, but it was Pobailscoil Chorca Dhuibhne who had a healthy 46-31 lead going into the final quarter. 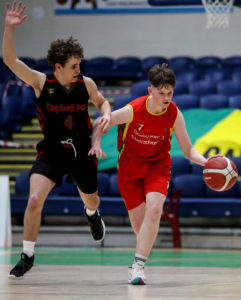 Uosis had the first points of the fourth, a layup in the second minute and a floater in the third to make it 50-31. Just before the midway point of the quarter Gaelcholáiste Cheatharlach’s Ben Caomhanach’s three pointer from a long way out reduced the deficit to 50-34. With just under three minutes to go Uosis coolly landed a nice jump shot after getting through traffic, to make it 54-34. There was to be no dramatic comeback like in the second quarter from Gaelcholáiste Cheatharlach, as Pobailscoil Chorca Dhuibhne eventually won 57-34.

IT Carlow one game away from promotion to Super League