AMY Dooley is within one game of winning her first ever national cup medal when she lines out for Cork side, The Address UCC Glanmire side on Sunday at the National Basketball Arena in Tallaght. The Old Leighlin and Carlow footballer is a student in UCC and her side face a tough challenge from DCU Mercy who are just outside the top-four in the Super League. 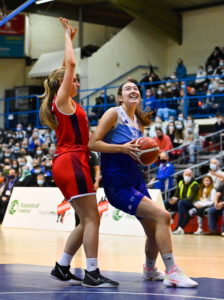 UCC Glanmire, who are top of the league at the moment, beat Killester WSL, IT Carlow and Singleton SuperValu Brunel to get to the decider. Dooley is in the form of her life but despite her club’s status at the moment is taking nothing for granted.

“We are doing really well. What has been good for us is that everyone is working as a team. Different players are stepping up. There could be a game where one player doesn’t do well but another player steps up. It is easy to play with Glanmire as we have that chemistry as a team. It helps us on so much,” she said.

“It is going to be a battle. I am really excited and I can’t wait.”

The Glanmire cause is helped by the American pair of Carrie Shepard and Tierney Pfirman.

Shepard has in her third year with Glanmire while Pfirman played for a spell in Germany.

“They are really good players. They are nice girls and we get on with them really well.

Dooley is taking nothing for granted either.

“Every cup game, anything can happen. All those games are a challenge. Every Super League team is really good. Especially when it is cup. Last week against Brunel, who are third, we knew going in it was going to be a battle. It was a huge team effort and that is what got us over the line in the end.

“DCU Mercy are a very good team. They are well-coached. Mark Ingle is a well-known Irish coach and is very well respected. They have excellent players. Many of them have played on Irish teams over the last few years.”

In both football and basketball the Old Leighlin sports star is no stranger to success. Yet to win on Sunday would crown a career which is getting better every season.

“For me it is one of my favourite years playing basketball. We get on so well and the Americans have fitted in so well. It is brilliant we are doing so well but it is the chemistry and the friends I have met down here is brilliant. I can’t wait to play my first cup final and it is great to have a team as good as this to be involved with.”