THE name Kylie Murphy is almost synonymous with Wexford Youths and it appears that is not going to change anytime soon after it was announced last week that the Graiguecullen woman has signed on for her 12th season with the Youths. 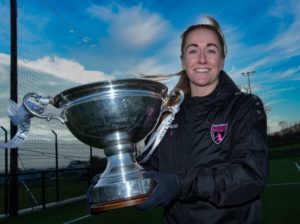 Kylie Murphy will be back with Wexford Youths next season as they defend their FAI Cup, and look for further honours Photo: Michael O’Rourke

“Sure, where else am I going to go?,” she laughed, when asked about going back. “I think we’re getting to that stage now where I’m going to refuse to leave the pitch unless it’s medically enforced.”

“I’m eally looking forward to this one now, I always look forward to them all but I’m very much looking forward to this one now. I feel like us as a team clicked into gear midway through the season and unfortunately we had a few draws and losses that probably hit us too hard at the end of the season. It was really exciting towards the end though because you could really feel a really good squad knitting together. Those players are all here this season too so it’s really exciting, really exciting to see the younger girls coming through too, it’s another year in the National League under their belts and a few new players in and around the team as well so hopefully we can get them across the threshold and into the squad.”

Murphy had a season to remember last season and it seems like the older she gets, the better she gets. She said she’s looking forward to developing her own role in the team more this season. “I definitely feel like there’s more I can do, there’s parts of my game that I can do better. Playing as a striker was a big learning curve last season and I’ve now had a year under my belt playing that role so now it’s what’s the next step, what more can I do with it?”

She’s looking forward to a big year ahead. “We went back in for pre season there on Tuesday. I was delighted to get back in, my body wasn’t so there’s going to be a lot of ice baths for recovery over the next few weeks but I miss the girls and I miss the training. It’s such a close knit unit so the buzz is unreal. Stephen (Quinn, manager), has his first full run at it this year having taken over halfway through last season but he seems to have a lot of things in place, he’s done an awful lot of work, you could tell from the very first session that he’s gunning for it this season so we’re hoping to kick it up a notch and do a whole lot better.”