CARLOW’S Amy Dooley played a key role off the bench as The Address UCC Glanmire  won their eighth InsureMyHouse.ie Paudie O’Connor Cup title, and first since 2018, after beating DCU Mercy 72-65 in a compelling contest at the National Basketball Arena. 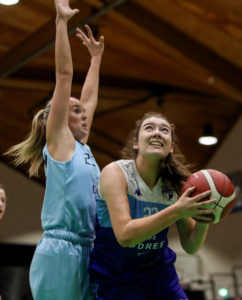 10 points in the fourth quarter from Ireland international and IT Carlow student Claire Melia inspired a come-from-behind win, having trailed by 14 points to DCU Mercy at one stage in the final quarter. Melia was awarded the MVP, as she ended the game with 21 points, 11 rebounds, six assists, four steals and two turnovers.

The Address UCC Glanmire and Áine McKenna made a blistering start, she landed two consecutive threes in the second minute, followed up by Casey Grace’s two point jump shot, which saw the Cork club establish an early 8-0 lead.

Bailey Greenberg’s layup in the third minute got DCU Mercy up and running. Melia opened her account with a layup and was fouled in the process and duly added the extra from the free throw line. She then turned provider for Carrie Shephard and it was 13-2 to the Address UCC Glanmire.

Melia’s physicality was causing problems for DCU Mercy, two consecutive layups from the forward had The Address UCC Glanmire 21-9 up with four minutes to go in the quarter. DCU Mercy closed the gap to 21-15 with six consecutive points from Rachel Huijsdens, Megan Connolly and Alarie Mayze. After a pair of baskets from Dooley either side of a Huijsdens jump shot it was 25-17 at the end of the first.

DCU Mercy scored seven consecutive points to start the second quarter and it was a one point game – the highlight being Nicole Clancy’s three pointer, as she made the desired impact off the bench. That scoring sequence was broken by a Carrie Shephard fadeaway jump shot with 4’04 left in the quarter, the score now 27-24 to The Address UCC Glanmire. Bailey Greenberg was having a good game offensively, her basket with 28 seconds left in the second quarter put DCU Mercy in front for the first time, and it was followed by a buzzer-beating layup from Mayze to cap the turnaround in fortunes for Mark Ingle’s side, who led 34-31 at the break. DCU Mercy’s two American’s, Bailey Greenberg and Alarie Mayze, with 13 and 10 points respectively at half-time.

Hannah Thornton and Melia exchanged baskets at the start of the third. DCU Mercy then opened up a seven point gap by the fourth minute, after a Greenberg layup and it was 42-35. The Address UCC Glanmire responded immediately, through layups by Tierney Pfirman and Shephard.

Next it was DCU Mercy’s turn to go on a run, Mayze and Greenberg’s layups made it 47-39 with 3’09 to go and The Address UCC Glanmire called a timeout. Claire Melia, who’d had a quieter second quarter, started to get back into the game in the third, her layup made it 49-43 with two minutes to go, but another Greenberg three point jump shot opened up a nine point advantage for DCU Mercy, 52-43, going into the final quarter.

It was the perfect start to the fourth for DCU Mercy too, thanks to a Mayze three-pointer ten seconds in. A McKenna free throw was brief respite for The Address UCC Glanmire, but Greenberg grabbed another three and the Dublin club now had a 14 point lead, 58-44, 30 seconds into the quarter.

But Glanmire came fighting back with a seven point run, including a nice three from Shephard, followed by two Pfirman jump shots, to make it 58-55 with 5’42 left. Mayze then steadied the ship for DCU Mercy, with a two point jump shot and they led 60-55 at the midway point.

Melia, who has three consecutive Player of Month awards in the MissQuote.ie Super League, illustrated once more her huge talent with a monster three from way out with the shotclock about to go – it was 60-60 with four minutes to go. The shot prompted wild celebrations from The Address UCC Glanmire supporters, who must have sensed the momentum was now with their side. McKenna reinforced that belief with a three point jump shot of her own 14 seconds later. It was followed by two Melia free throws, Mark Scannell’s side were now ahead 65-60 with 2’23 to go.

Hannah Thornton’s layup made it a three point game with 2’03 left, but seven points from the free throw line for The Address UCC Glanmire in the closing stages saw them close it out, 72-65.

The Address UCC Glanmire head coach Mark Scannell said “I hate when we get 10 and 12 point leads, because I find when we do that we kind of switch off because we think that it’s going to be easy, which we all do. You see it in a soccer match, the team goes 2-0 up they like to think it’s all over, but then there’s a goal and back in the game. So today we kind of played a bit like that, but what character, because the tide was going out, we were 14 points down, we got it back at one stage and I thought we were on a run, we turned it over, they scored a three point play and I was going ‘here we go again’. I must say I said a few prayers to my mother and father today in the middle of that game.”

“Claire’s shot – sometimes you need something special in a big occasion to make it happen and she did and then Áine (McKenna) backed it up. Áine had a fantastic start and then she cooled off, but down the stretch when we needed a captain and we needed a leader (she stepped up). And then then Tierney (Pfirman), who came in and had a very, very tough night at the office, but managed to find a way in the fourth quarter, a big rebound at the end, three point play, unintentional foul, that was the winning of the game as well there. So there were loads of little moments.”