IT Carlow exited the Sigerson Cup by the slenderest of margins as they were just pipped at the post by Queen’s University Belfast on their home pitch. 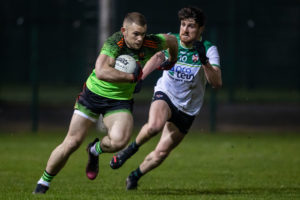 Carlow’s Mark Furey in action for IT Carlow against Queens University Belfast
in the Sigerson Cup this evening
Photo: ©INPHO/Morgan Treacy

The teams were level on 11 occasions across a fiercely competitive game but at the final whistle it was the Ulstermen who just about had their noses in front, thanks mainly to eight points from Armagh’s Conor Turbitt.

It was a ferocious battle between two closely matched teams. The northerners led by the first half water break, IT Carlow flipped that to lead by a point at half time and it was level going into the final quarter but Rory Donnelly scored what proved to the winning point, despite the best efforts of the likes of Kildare’s Adam Steed and Wicklow’s Gearoid Murphy for IT Carlow.

Carlow’s Mark Furey, Conor Doyle and Josh Moore all started in defence, while Colm Hulton was introduced as a half time substitute and scored two points.

Elsewhere, Conor Crowley didn’t feature as UCD also lost by a point, 0-7 to 0-6 to Letterkenny IT. That leaves Jordan Morrissey with UCD as the last remaining Carlow man in the competition.