Carlow team named for opening round of Allianz League

NIALL Carew has named a new look Carlow team for the clash against London in the opening round of Allianz Football League tonight in Netwatch Cullen Park, throw in 7pm .

In many ways it will feel like the start of a new era as unrestricted crowds return to the venue for a competitive game for the first time in almost two years.

There have been huge changes to the team since then, particularly in defence. Daniel St Ledger, Shane Redmond, John Murphy and Conor Lawlor are unavailable for a variety of reasons so Keegan Bradley, Dara Curran, Jamie McCabe and Shane Buggy come in for their league debuts.

There are reasons for excitement in the forward line, even if Paul Broderick will undoubtedly be missed after his retirement. Darragh Foley captains the team in his 13th season with the county and wears number 14, Carlow will look to Conor Crowley and Colm Hulton either side of him to torment the London defence.  In the half forward line, the Clarke brothers, Jamie and Shane, are joined by Josh Moore. Moore’s IT Carlow Sigerson Cup, and Rathvilly, team-mate Conor Doyle starts in midfield alongside Murtough Ware. 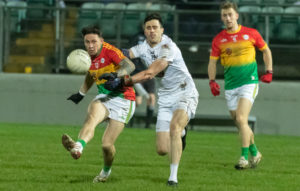 Shane Clarke on the ball for Carlow during the O’Byrne Cup game against Kildare earlier this month
Photo: michaelorourkephotography.ie

Jordan Morrissey is the last remaining Carlow player in the aforemention Sigerson Cup and he is due to play a quarter-final on Wednesday, he is named on a youthful looking substitute bench.

There will be no tickets available at the ground tonight. They must be bought in advance and can be purchased through the below link.