IT Carlow got the result that they needed in Dublin this evening to top Group B and progress to the quarter-finals of the Fitzgibbon Cup after a 3-10 to 2-13 draw with DCU.

A draw was always going to be enough to secure the passage into the last eight for DJ Carey’s team but there was the chance that if Waterford IT beat Maynooth University by a big score elsewhere in the group, they eventually won by 5-17 to 0-20, that IT Carlow could be pipped on score difference if they lost.

That led to the strange sight of DCU turning down the chance to tap over a winning point from a 20 metre free deep into injury time and instead go in search of goal that would have eaten into the score difference.

Ultimately, that came to nothing and wouldn’t have been enough even if the shot did find a way to the net. 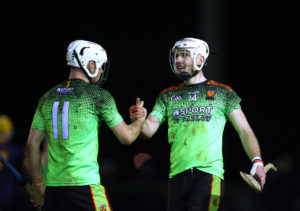 Job well done – IT Carlow’s Martin Kavanagh and Chirs Nolan celebrate after their draw against DCU that saw them top Group B in the Fitzgibbon Cup
Photo: ©INPHO/Tom Maher

IT Carlow will be concerned, however, at the manner in which they allowed a six point lead slip in the final few minutes, with the Dublin side scoring the last 1-3 of the game.

Marty Kavangh gave IT Carlow a flying start with a goal from a fifth minute penalty, and he finished the game with 1-7. IT Carlow led 2-4 to 0-7 at half time and seemed to be cruising to a win when Wexford Seamus Casey scored their third goal in the second half but DCU’s late rally made things a little more uncomfortable than they needed to be.

IT Carlow now have a home tie in the quarter-finals against Group A runners-up, University College Cork.

In the Sigerson Cup, Jordan Morrissey’s DCU had a similarly nervy final few minutes before securing the place in the semi-finals with a 2-12 to 2-11 win over Ulster University. 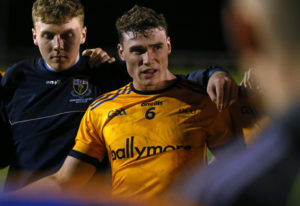 DCU’s Jordan Morrissey leads the team talk  after his team booked their place in the last four of the Sigerson Cup
Photo: ©INPHO/Tom Maher

In a closely fought game, DCU looked on course to close out the win when they worked themselves into a four point lead but a late UU goal left just one point between the team and DCU had to defend diligently through the injury time period before clinching the win.