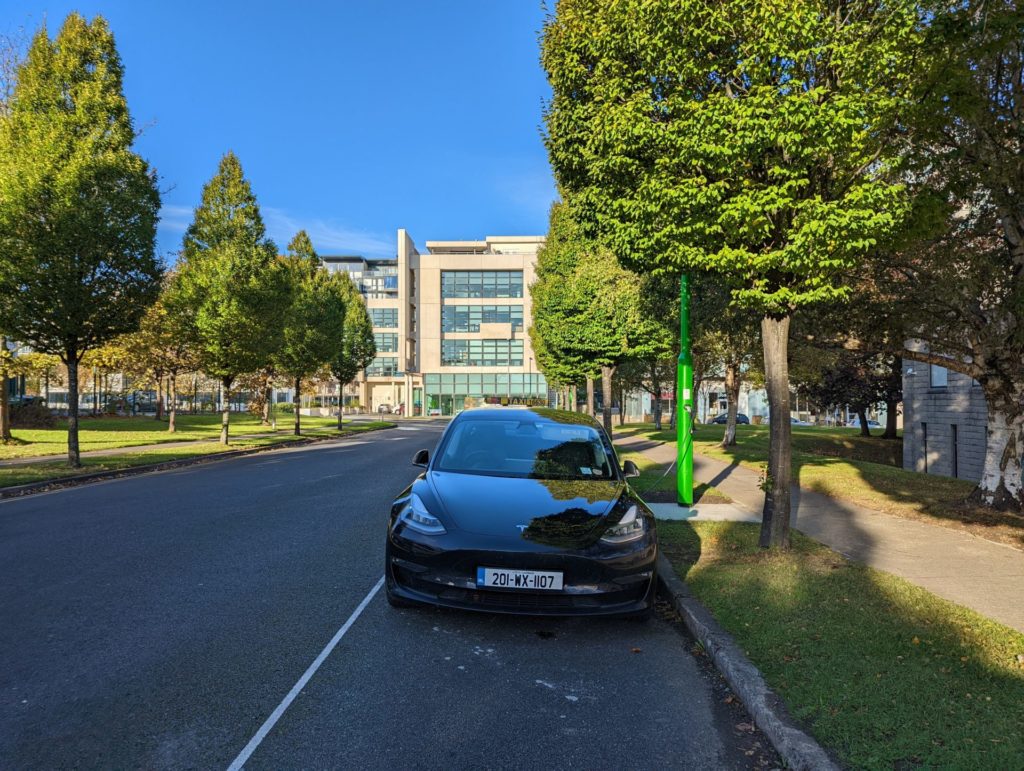 By Paul Kelly and Eamon Stack

The first order is 25% of its fleet. Other companies will follow.

Imagine all the tourists in rented electric cars heading to or through Carlow. Where are they going to charge their vehicles, either on the way or while touring in Carlow? And will there be tension between tourists, passing travellers and locals over EV charging infrastructure? With only a handful of individual charge locations, Carlow is heading for trouble!

Climate change is a major concern. Everyone who is aware of the global crisis wants to do something significant to halt climate change. So we need to look at the core problem and respond in a systematic way.

There are four human causes of climate change, almost of equal proportion: home heating; electricity generation (40% is already sustainable); agriculture/industry; and transport. In the next ten years, the only significant change we can make to reduce our harmful emissions is transport. As we change our cars regularly anyway, and EVs are readily available and the grid is getting greener every year, the transition to EVs is the only option.

And sales of electric cars are really taking off. Look at these statistics – and remember that an electric car in motor industry statistics is a car with a plug, including battery electric cars (BEV) or plug-in hybrid electric cars (PHEV). In the second half of last year, 25% of new car sales in Ireland were electric cars. In the UK, the figure was 33%; in Sweden, 50%; and in Norway, 90%.

In fact, by St Patrick’s Day, Norway expects to go completely green: 100% of all new private cars will be electric. While Norway’s transition has been strategically planned over eight years, drawing from its rather substantial sovereign wealth fund (oil), next-door neighbour Sweden, which has not used a major government intervention, is following fast behind.

WHAT WE NEED IN CARLOW

The big question for Carlow is: what infrastructure is needed for the pending increase of EVs in the county? The big danger is that local EV owners will end up competing for resources with tourists and other EV drivers passing through.

For instance, I was at the Deerpark Business Park on the old Dublin Road and could not use the fast charger as a vehicle was sitting on the single rapid charge for over an hour. And the charger at Carlow Town Bus Park and others had people icing them. With only one fast charger in Carlow town, any passerby will be queuing for a charge! A one-hour wait to start charging is completely unacceptable.

Four years ago, UK consultancy Element Energy was commissioned by the four Dublin local authorities to determine what EV infrastructure was needed in the metropolitan area. From their report, I have deduced a framework to determine the EV infrastructure required by EV drivers per 100,000 of population (based on reaching 80% of government targets).

The first useful output from this report is the language. How do you describe what EV infrastructure we need before determining how much is needed? There are two main categories of people who need public charging infrastructure. The first is local people who do not have off-street charging, while the second group is comprised of visitors, passing traffic and tourists.

Based on my analysis of the Element Energy Report, I believe Carlow will need the infrastructure set out in the panel below.

To clarify, a charging hub (urban or en route) means approximately ten fast chargers in one location. A fast charger can deliver between 50 and 300 units of electricity (kW/hr) in one hour. The typical charge time is 20 minutes. A slow charger (destination or street charger) delivers six units of electricity an hour. The average charge time is eight hours.

This analysis gives a general framework for Carlow County Council. Its job, and biggest challenge, is to meet the electric car needs of both local people and tourists. It particularly needs to plan for the peak – the peak of the tourist season, peak weekends, such as sporting finals, so as not to have unhappy visitors and unhappy locals.

Local authorities do not need to do everything, but they have four vital roles:

Carlow is a key en-route hub for major destinations in Ireland. With one fast charger, which is well off the motorway but has good services such as food/bathroom and retail outlets, the location needs more chargers and at least one charging hub. This is a good start, but it will need to increase to ten or 15 chargers. Carlow County Council also needs to co-ordinate with Kilkenny and Waterford to ensure en-route hubs are located at key points north and south of Carlow/Kilkenny.

There needs to be a charging hub on the M9. Currently there is one fast charger and one rapid charger at Kilcullen South services. The next charger is in Carlow town and it’s in a very busy retail park and often in use. Having only one rapid/fast charger on the entire M9 south of Naas is not enough for two-way traffic between Waterford/Kilkenny, Carlow, Naas and Dublin.

Carlow town has plans for additional DC chargers, and indeed some in other towns, but more needs to be done on the major arteries.

The Wexford to Portlaoise route passes through Carlow town and as of yet there are no chargers on this road for commuters. The Wexford road out of Carlow towards Bunclody, Enniscorthy and Wexford town is completely under-served from a rapid charging point of view. Often you’d have to drive into Wexford town and find a free parking spot to charge. The two fast-charging locations have single charges and there is no charging hub at all in the southeast, in particular near Rosslare Harbour, where you have huge swathes of tourist traffic coming off the ferries.

It is interesting to learn from the Norway tourist experience. Its population is similar to ours, but distances are much greater. Most of the en-route charging hubs are in service stations and most have between 20 and 40 fast chargers. The owner of the service station usually has the same number of EV chargers as petrol pumps, but they allow other providers to install fast chargers in their car parks. For example, Tesla will often install 20 chargers, Ionity (owned by German car manufacturers and Ford) put in six, and others put in four to six chargers each.

In Ireland, ESB e-cars could install some chargers, and Tesla, Ionity and our own EasyGo would also invest. Recently, EasyGo received investments to install 500 fast chargers across Ireland. UK firm Gridserve or Dutch company FastNed could also invest.

Policy decisions are needed to determine how best to serve the local population. How much local EV infrastructure will overlap with tourist infrastructure? And does Carlow opt for more urban fast-charging hubs than on-street charging, or a combination of both? Given the three major routes that pass through the county, charging hubs that serve both passing and local traffic would be a good investment.

However, it would be unreasonable to expect people in Carlow, Tullow or Bagenalstown to travel to charge their EV. Serious consideration needs to be given to providing street charging in all towns in the county that would not have a charging hub. A mix of rapid and destination charging should be considered in every town of 1,000 people or more.

Carlow County Council then needs to decide where it might put street chargers. These are slow chargers for local residents, who do not have off-street parking. For some residents who normally park outside their house at the footpath, a simple gully to allow a charging wire across the forthwith might be the cheapest solution. Another cost-effective solution is to put charging sockets in lamp posts. As street lighting has been switched to low-energy LED, there is plenty of capacity in the installed wiring to cope with 13a sockets.

While the adoption of electric cars by locals will be slower, there is a clear benefit for rental companies to switch first. They change their cars every two years. EVs will cost 50% less to maintain and last twice as long. Fuel costs for renters will be reduced by 70%.

The greatest immediate need, therefore, is for overnight charging of tourists’ EVs. This is why ‘destination chargers’ are a key element to the new charging infrastructure. Some hotels have installed a small number of destination chargers. But we will need 20 to 40 in each hotel before 2025.

B&Bs will also need to install charge points. It is interesting to know that a standard plug will often be adequate. It seems to make sense for every B&B to install at least one charge point (rated 6.6 units per hour) and several external sockets (two units per hour) and, of course, switch to day/night electricity tariff. The typical cost of an overnight charge for one EV is €5.

Whether we are enthusiastic or not, whether we want to change to EV or not, even if we are an enthusiastic promoter of cycling, EVs are coming to Carlow in large numbers and will require a significant investment in infrastructure by 2025 and a major ramp-up until 2030. The burden of cost will be spread between local and national government, private charge providers and private accommodation providers. Nevertheless, it is 100% the responsibility of Carlow County Council to plan for the infrastructure and drive the adequate roll-out of EV infrastructure.

It is time for Carlow to drive forward sustainably.

If you have any questions about charging electric vehicles, you will find a wide range of resources on the Irish EV Owners Association (IEVOA) website www.irishevowners.ie. We have a very active Facebook page with over 7,000 participants.

Paul Kelly lives in Carlow and is CTO of Blacknight. He serves on the committee of the IEVOA and The Tesla Owners’ Club Ireland. Eamon Stack is co-founder and director of Range Therapy, a social enterprise supporting the adoption of EV in Ireland. Eamon is the policy person on the IEVOA committee.