Clifford comes to Carlow but Morrissey will get the hometown support

GAA fans in Carlow will get a chance to see one of the best footballers in the country in action when David Clifford and University Limerick take on DCU in the Sigerson Cup semi-final.

The Kerryman has been in sensational form in UL’s run to the last four and is currently the top scorer in the competition with 5-16.

But he will be running into DCU’s home town favourite, Jordan Morrissey. The Éire Óg starred for the Dublin side when they won the last competition in 2020  and he has played a key role in the defence of their title so far. 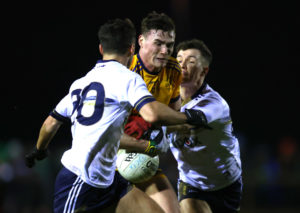 UL also feature Dan Gray in their attack, from just across the border in Castledermot.

There have been some superb games so far in this competition and this is likely to be another with both teams desperate to book a place in next week’s final, to be held in IT Carlow.

Admission is free for all.

The semi-final on the opposite side of the draw between NUIG and MTU Kerry throws in at 6pm in Rathkeale.