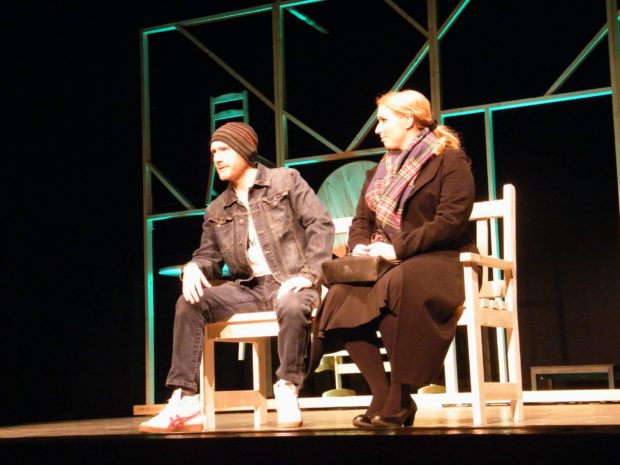 An award winning local drama group are rearing to return to the stage after a two year hiatus. Bunclody Kilmyshall Drama Group presents their latest play The Good Father in Spellman Hall, Kildavin on Sunday 27 February, Tuesday 1 March and Wednesday 3 March at 8pm.

The Good Father written by Christian O’Reilly was winner of the Stewart Parker Award.

Directed by Kieran Tyrrell, this an unlikely love story brought to life by actors Padraig D’arcy and Mairead Connaughton.  The play is a love story of how two people starting at the end try to reach a new beginning. Tim and Jane are from different sides of the class divide. After a chance meeting at a New Year’s Eve party, they attempt to form a relationship against all the odds. This heartfelt, moving drama charts the journey of their love, loss and redemption. A touching story celebrating the triumph of hope.  The Good Father was originally produced in 2002 by Druid theatre company.
This play will be the group’s festival circuit entry in 2020.  Like everything else, the world of Irish amateur drama ground to a halt in March 2020, just when the annual, full length drama circuit was about to peak.

The months of rehearsals, set design and construction and preparing costumes ended in cancelled performances and festival as the group all stayed home to keep themselves and loved ones safe.
Two years later, it is safe to say that the award-winning drama group is rearing to go again. In the period of closure, the group would normally have presented five shows to local audiences and group Chairman Rory Kinsella says that the group cannot wait to perform for their audiences again.

Of course the rehearsal rooms and festival procedures are not the same as 2020 but the group is more than happy to comply with Covid safety measures if it means getting the show back on the road again.

The group will compete in eight festivals and will entertain audiences as far away as Newry and Castleblaney and Roscommon and Claregalway. They are hoping that their local local audience will turn put in numbers to send them on their way.  Tickets on the door,  no booking required.

Filed under: things to do, whats on in Carlow