CARLOW football manager, Niall Carew, backed his players after Sunday’s game against Cavan in Breffni Park and says he is happy with the progress being made despite the 0-19 to 1-12 defeat. The goal chances Carlow created was a good omen but he knows these three-pointers have to be taken. 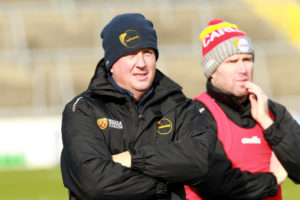 “We created about five goal chances. We only took one and we have to be taking three out of five chances. One on one. Just a little bit indecisive. Other than that every one of our players was excellent.

“I thought our forwards had the measure of their defenders. Every time the ball went in we looked very dangerous. We can say the same about them. We struggled with the runners of the shoulder in the first half but in the second half we did better. The big thing is we are improving,” he pointed out.

“It was definitely a great performance from all of those players. They put in a big shift. Coming from the Waterford game obviously Cavan was a big step up again but we felt we grew into the game.”

There were times one felt that if Carlow had gone in that little bit harder they could have won more ball while the intensity dropped after Cavan had been reduced to fourteen. Instead it was the home side who drove on.

“It is down to inexperience. We have a lot of young fellas playing. They are probably a little bit cautious. I felt Jordan Morrissey drove it on. Darragh O’Brien. Darragh Foley was excellent again. He is a great captain. A brilliant leader. Up front, Conor Crowley skinned his man but he didn’t come back with anything of note. If he wasn’t getting chances I would be worried but he is,” explained Carew.