SECOND half goals from Oisin Doyle and Ronan Quinlan, on his 18th birthday, made sure that in the year of the 20th anniversary of the tragic death of former O’Hanrahans and Carlow star Andrew Corden the cup named in his honour was finally lifted by his home county. 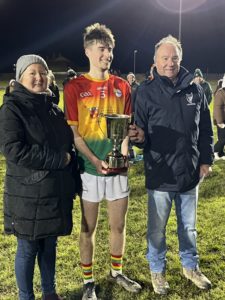 “This is a special cup for Carlow GAA. Andrew was a fantastic player who captained Carlow before passing away at a young age. It was a tournament that we really wanted to win, we are the first Carlow team to win it, so we are delighted with ourselves and hopefully we can drive on now before Championship.”

There was little to choose between the teams in the first half and Carlow bounced back well after conceding the first three points. After Behan got them off the mark in the 11th minute, Carlow went on to score four points in a row.

Wexford battled back well though and led by 0-6 to 0-5 at half time, but they suffered a blow when Jack O’Leary was shown a black card in the last minute before the break.

Carlow manager Maurice Browne introduced senior hurlers Fiachra Fitzpatrick and Jack McCullagh either side of half time but despite that, and their numerical advantage, Wexford outscored them by 0-2 to 0-1 in the early part of the second half.

However, in a key moment in the game, in the last play before O’Leary returned to the field Oisin Doyle smashed a shot into the Wexford net.

Wexford levelled but Carlow’s second goal soon followed when Quinlan celebrated his birthday in style by pouncing on a loose ball after Bryan McMahon’s shot had been blocked and he gave the Wexford goalkeeper no chance with his powerful shot.

After that, Carlow were in control in the final quarter and a Wexford goal with the last kick of the game in the third minute of injury time made the scoreline a little tighter than the closing stages had actually been.

Carlow will look to build on this morale boosting win as they ramp up their preparations to play either Offaly or Louth in the Leinster U20 Championship quarter-final on 14 April. 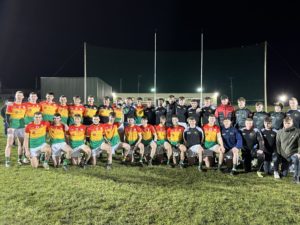