THE attitude of the Carlow minor football panel is top-notch. So says manager, Damien McMahon as he looks forward to their opening game in the Leinster minor football championship on Saturday at Netwatch Cullen Park against Wexford (throw in at midday). 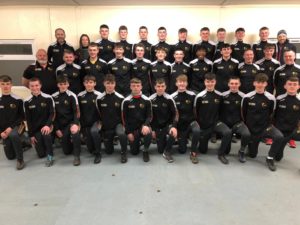 “It is an age group I would have known well. There is a good spread from around the county. They are coming through the Colt system. You can see the benefit of it and they have an intercounty attitude and this is something which will benefit the whole county,” said McMahon.

The Palatine man is working out of a panel of 32 but this will have to be cut to 24 for Saturday. Yet all the squad will be in the ground regardless of who is selected.

There are two groups of four and one group of three in the competition. Carlow play Wicklow in their second game in over three weeks’ time. Last year all intercounty teams faced difficulties because of the pandemic. This year players have been able to settle into a system.

“There is more of a routine to everything. Last year you could have got a phone call to say you could go back to the field. It wasn’t as structured but this time we are able to work with the players,” explained Damien.

“Last year we based our panel on three trial games in a week. This year we started back in November and were back in the field a lot quicker. There is a better structure and this year we have had more practice games.”

“We were able to get a shape on the team this year. The lads are looking forward to Saturday.

I would have had the Palatine age equivalent at under 12 and the latter ages up to 15. There is a good spread from around the county.”

He admits he knows little about the opposition but says such is the nature of this competition counties know very little about each other anyway. For him it is all about developing the players he has at his disposal and grooming them for future tests at a higher level.

“After this year, you would hope the under 20s are next. They have a fantastic attitude and then on to senior after that. There is a fantastic set-up. The ground work Sean Gannon, Robert Sansom, Sham Comerford and many more have all these lads prepared to a tee for when they stepped up to minor.”