CARLOW began their Leinster Minor Football Championship with a 1-8 to 1-4 win over Wexford at Netwatch Cullen Park.

Windy conditions made things difficult for both teams and there was little to choose between through the opening exchanges. 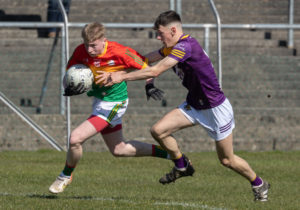 But, with the scores tied at 0-3 apiece, Carlow hit a scoring burst and ended the half with points from Brandon Cassidy (2) and Cian Ray to lead 0-6 to 0-3 at half time.

The game sprung to life early in the second half with goals at both ends. Cillian Moore was the first to strike for Carlow with a composed finish but it didn’t take Wexford long to reply in similar style when Dean Hillis scored after Cullen had set him up.

Instead of kicking on from there, that was the last score from the visitors. Despite that, Carlow weren’t able to put the game to bed but points from Shane Duffy in the 43rd minute and a late effort from Cian Gorman Comerford were enough to get Damian McMahon’s team over the line.

Their next game in the competition is in Aughrim on 20 April.

For a full report, reaction and photos from this game, check out Tuesday’s edition of The Nationalist.