IT’S already been a season to remember for New Oak Boys as they continue to set a searing pace at the top of the Nationalist Premier Division in the Carlow Soccer League, and they had another special moment in the early stages of this morning’s game against Hanover Harps.

Father and son duo, Lee and Jamie Murphy scored the first two goals of the game to make it a very special family affair.

The duo first played in the senior team together in January and their goals today could potentially help them one step closer to their target of winning their Division. The game ended 4-0 in New Oak’s favour and they are looking increasingly hard to catch at the top of the table. 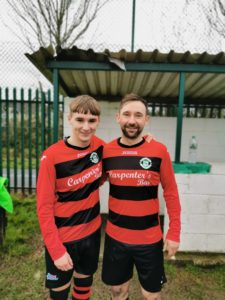 Father and son duo Lee and Jamie Murphy after their first game together in the Nationalist Premier Division in January
Photo: New Oak Boys Twitter