Carlow’s U20s win meant a lot to Corden family but 20 years on, Andrew’s death still leaves a hole in their lives that can’t be filled

CATHERINE Corden still remembers that knock on the door, 5am in the morning. It was never going to be good news.

“You open the door. You are half asleep and you are looking at these people. I didn’t recognise them. The priest didn’t have his collar showing,” recalled Catherine.

Those callers needed to establish who Catherine was before they could give her the bad news.

“Is there anyone here. Who are you? That sort of thing. Then they told me.”

Her brother, Andrew, had lost his life in an accident. The incident had taken place less than a quarter of a mile from the Oak Park Road family home.

Ironically, in the job she held, she had called to doors in similar circumstances giving news that no family ever wants to hear.

“I had worked in ICU. I had gone out to people. You say sorry.  You think you have empathy. It is nothing. The absolute……literally your heart is breaking,” she recalls.

They then had to tell her parents, Frank and Mary. Her siblings too.

“I rang Bryan, Fiona and Richard.  They came over and then we had to tell Mum and Dad.”

Catherine had been living in Saudi Arabia but was home that week. She had stayed on to meet some old friends whom she hadn’t seen for some time and were themselves home from America on holidays.

“That is how I was in the house to answer the door. I do think and sometimes wonder how it was I stayed the week. Did it save Mum or Dad answering the door?”

In his short life Andrew had captained Carlow to an O’Byrne Cup final victory while he was also an integral part of the O’Hanrahan’s team that won the 2000 Leinster club final against Na Fianna in Portlaoise.

His father,  Frank, who passed away recently, was a packaging engineer in the Sugar Factory at the time.

“We were not a GAA family at all. Mum and Dad had moved from Liverpool,” noted Catherine.

“I used to remember Sundays where there would be people in cars listening to GAA matches. That never happened in our house. It was always rugby. Dad had trained the underage teams. Andrew went up but he had no interest at all. We were amazed when Andrew started to play football. Was it someone in New Oak soccer club who asked him to play football? To this day I don’t know. I think he was about sixteen. He was late to Gaelic. He was certainly not playing from an early age.”

“It was only when he was playing for Carlow or got to a county final that we started to take interest.

“I suppose when he became captain of O’Hanrahans and then of Carlow. They were very proud moments. You could see Dad going down to watch Andrew. He would be standing tall. Certainly, those achievements and to be recognised by your peers. To be given the responsibility of captaincy is always something to be very proud of.” 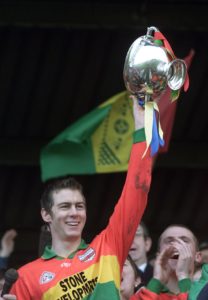 Catherine tells the story of a young Andrew, who even at that stage, had a mind and a determination of his own.  Her father had to drive to the far side of Castledermot to bring her wandering son home.

“Andrew was four at the time.  He got Fiona’s bike. With the dog, Brandy, he cycled to see his aunt who lived near Ballitore. He was always doing things. He could be gone on his bike early in the morning. We would all be looking for him.”

The introduction of the Andrew Corden Cup meant the world to the Corden family.

“It almost brought us to tears. Every day we would think of Andrew. Something would happen within the family group to remind us. His daughter, Sorcha, is still a big part of our lives.

“To think that somebody would think of him. Every day we would still think of Andrew. To us it was that somebody still remembered Andrew. We think of him all the time but to think the GAA community in Carlow felt that this could be something appropriate to remember him by,” said an emotional Catherine.

Then with Carlow captain, Mark Behan, lifting the cup on Tuesday it meant so much to the Corden family.

“It was very special for us. My sister, Fiona, was delighted to be handing the cup to the Carlow captain. I have to say he spoke very well.” 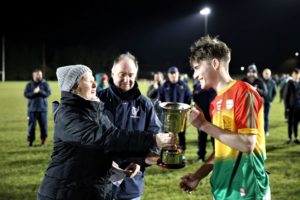 She is grateful to Carlow GAA for the way her brother is remembered.

“The write-up in the programme was really special. It captured the football aspect but also the human. What sort of person Andrew was. We were delighted to be there and delighted Carlow could pull off the win. It was very special.” 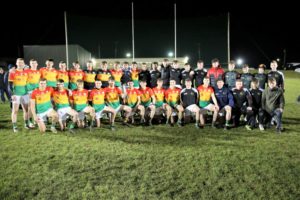 Marc Carpenter who soldiered with Andrew on successful Carlow and O’Hanrahan teams remembers a player who was ahead of his time.

“For someone who had to mark Andrew in training he was the most complete footballer you could have. Especially playing in the position he had in the back-line. He had every attribute you could want for a footballer which is unusual for the position he was playing. Andrew had  blistering pace, a great set of hands, an immense attitude. He seemed ten years more mature than anyone else on the pitch,” noted Marc.

“I remember Michael Dempsey (the O’Hanrahans manager) talking back about him after one particular game.  We were all enjoying ourselves but Andrew wanted to know how he could be a better footballer. He had all the physical attributes but mentally his attitude set him apart.

“He was probably one of the best full-backs in the country when the accident occurred. In the club he was never replaced. He was that good. In the Leinster final he was marking Jason Sherlock and didn’t give him a look. In the All-Ireland semi-final he was marking Colin Corkery who only scored from frees. Two of the best forwards in the country and they couldn’t handle him,” said Marc.

Leaving sport aside, Andrew will never be forgotten by his family. Losing him broke their hearts.

Andrew worked in sales with his brother, Bryan, who founded Deycom. Catherine says that worked well.

“Bryan said he was just a natural. He never insulted anybody. If there was banter he could do it in such a way he could never offend anyone. He was so inoffensive really and had such a lovely manner. He was just great craic. From Bryan’s point of view he lost not just a brother but someone he worked with and was so close to.”

“He was such a great guy. My parents were never the same afterwards. Everybody loved Andrew. It really just rocked us all,” acknowledged Catherine.