ED Byrne returns to the starting XV for Leinster for the clash against Munster at Thomond Park tomorrow evening in round 15 of the URC (KO 7pm – LIVE on RTÉ, Premier Sports and URC TV).

Byrne, who has now made 80 appearances for his province, is the one change in the front row from the team which defeated Connacht last week and he replaces Peter Dooley to take his place alongside James Tracy and Michael Ala’alatoa. 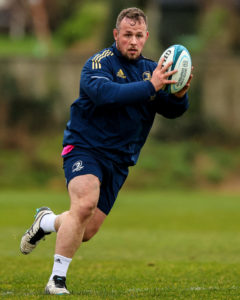 Ed Byrne returns to the Leinster team for the trip to Thomand Park to take on Munster tomorrow evening
Photo: ©INPHO/Ben Brady

Elsewhere, head coach Leo Cullen is able to welcome back a selection of Irish international following the completion of the 2022 Guinness Six Nations a fortnight ago.

One of those, Garry Ringrose, will lead the side out as captain in Limerick. Alongside him in midfield is Robbie Henshaw while James Lowe, Jimmy O’Brien and Hugo Keenan make up the back line.

At half-back, Jamison Gibson-Park returns and will be partnered by Ross Byrne.

Jack Dunne makes his first start of the season in the second row where he links up with Devin Toner in front of a back row of Caelan Doris, Josh van der Flier and Jack Conan.