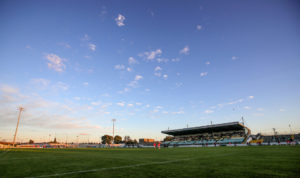 Netwatch Cullen Park will host the Leinster U20 Hurling Championship first round tie between Carlow and Westmeath on Saturday
Photo: ©INPHO/Evan Treacy

MARTIN Byrne, the Carlow under 20 hurling manager, is preparing his players for their first round Leinster championship game on Saturday against Westmeath at Netwatch Cullen Park. Previous year’s minor games against the same county suggest this is going to be close but the manager is looking at a bigger picture. He says he is, of course,  hoping for a win but, win or lose,  he is steering as many of his squad as possible towards a higher level.

“At the end of the day I am only developing players and hoping they go on to the senior team. If I can get three or four more players for the senior panel next year then that will be good. I want to get them training so that they know what they have to do as they look forward,” the Rathnure man says.

Byrne has been involved with successful Mount Leinster Rangers senior teams and is well respected and well-thought of in hurling circles. Trying to get players together who have senior intercounty hurling and football aspirations means he has to juggle times and training schedules.

“So far. So good. It is hard when you are in the middle of a senior hurling and senior football league. When you have dual players they are being pulled around,” he says.

He is working with a squad of 32. Six of those are on the senior intercounty panel.

“It is tough on management teams. Tough on players but we are looking forward to it,” the Carlow manager says.

At this stage Evan Kealy is unlikely to play because of hamstring issues. Michael Joyce, Sean Joyce, Scott Tracey and  Fiachra Fitzpatrick are all in the treatment room. Carlow will need to be able to call on a full-strength squad. The preparations have taken the course they have and now it is going out and seeing where training sessions have taken them.

“I just want to get on with it now,” says the manager.

If Carlow win they will go to face Wexford away in Round 2 on 9 April.