INTERCOUNTY players will not be returning to their clubs when the Senior Football League Division 1 throws in at venues around the county on Friday.  Even though the players have been given a week off, Niall Carew, the Carlow senior football manager, confirmed as much on Saturday.

Potentially the tastiest game of the evening is Palatine and Éire Óg with two former county managers squaring up to each other. Pado Flynn managed the Carlow under 20 hurlers and here he is in Palatine with a football team. Not that he was ever too far away, Turlough O’Brien has returned home to YI country. Both managers are characters and no doubt we will hear a lot more of them later in the season. 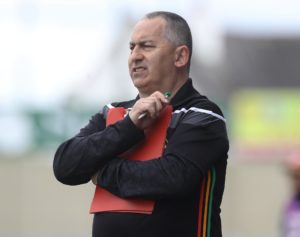 Turlough O’Brien begins his tenure in charge of Éire Óg this evening with an SFL Division 1 tie away to Palatine
Photo: ©INPHO/Lorraine O’Sullivan

Reigning county champions, Rathvilly, take on Bagenalstown Gaels who gave them quite a scare in last year’s championship. All that is water under the bridge now but the challengers will fell the loss of Jamie Clarke a lot more than Rathvilly will miss Conor Doyle who are tied in with the Carlow senior footballers.

Tinryland and Old Leighlin will feel the league is a good place for them to feel their way into the season. Both have a lot to prove and the absence of Mikey and Seanie Bambrick is sure to hurt Old Leighlin. No matter what though, somebody’s absence will give other players an opportunity to show what they can do.

Division 2 actually began last weekend with a draw between Naomh Eoin and Kildavin-Clonegal but for the rest of the teams, they will kickstart their season this weekend.