TOP level referee Patrick Murphy says the abuse of new referees in the GAA is something that must be tackled, or else there are serious problems coming down the road in terms of getting enough officials to cover all games. 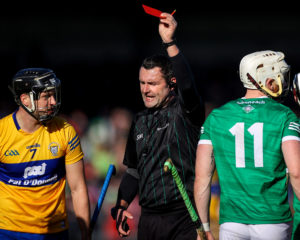 Murphy was a fine hurler himself before taking up the whistle so has seen incidents from both sides of the fence, as it were. Speaking to Nationalist reporter Kieran Murphy on The Four Lakes Podcast, Murphy said his experience helps him in most situations but agreed that the levels of abuse is putting off new people coming into refereeing.

“It’s a big factor for new referees,” he said.

“When you have done it for a few years, call it a thick skin, call it getting to know players in the heat of battle…a lot of fellas say things they don’t mean at the time and are the first ones to come over and shake your hand at full time, but it is a big problem. The GAA have a big problem in the recruitment of referees and I think that if something is not done soon I think our games are going to be in great jeopardy,” said Murphy.

More and more demands are being put on those who do referee due to the lack of newcomers coming through but Murphy said this isn’t just a problem in Carlow, it’s a problem right throughout the country.

“I’m on the national panel so I am talking to referees from all over the country and no, it’s not just Carlow. It’s a national problem and it’s going to become a bigger problem unless something is done about it.

The podcast is an illuminating and wide-ranging chat on what is like for a man behind the whistle in some of the biggest games in the country and you can listen to the full podcast here.