CARLOW senior football captain, Darragh Foley, has given a resounding thumbs up to the new Tailteann Cup. The competition was introduced for division 3 and 4 teams who do not make a provincial final. It is a big change for Foley who, along with previous management teams, were adamant Carlow should have their day out against the likes of crack Dublin and Tyrone team. Foley was speaking on the Across the Four Lakes Podcast last week. 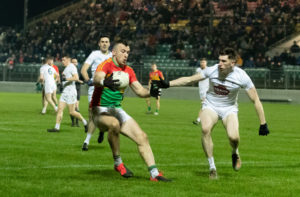 “When Steve Poacher and Turlough O’Brien were over us we believed we could beat any team on any given day no matter who they were. That is why we weren’t big advocates of having the Tailteann Cup back then,” explained Foley, who went on to give his reasons for changing his mind.

In seven league and one O’Byrne Cup tie Carlow used 32 players. The likes of Darragh O’Brien and Foley  brought experience and leadership into the squad while Colm Hulton and Conor Doyle are learning all the time.

Teenager, Shane Buggy,  registered game time in all seven league ties while, another rookie, Dara Curran, in the space of one year, has gone from a relatively unknown player to a senior championship winner and almost an automatic selection on the Carlow starting fifteen.

As far as Foley is concerned all this is progress and the new competition will feed into the development of the players.

“At the minute there is a big difference, strength and conditioning wise,  between the top teams  and the likes of ourselves which is a younger squad starting off. We can use this Tailteann Cup as a development thing and hope to get out of it then.”

The Kilbride man is in his 13th year with the Carlow senior footballers. He hopes the county will progress sooner rather than later.

“I might not be able to see it out if two to three years is the end goal. This year was about getting development and getting game time into a lot of new lads and getting them up to speed.

“Every time we went out training and played games we have been there or thereabouts except for one when we didn’t turn up. It was small details which cost us. The lads are learning so I would be very hopeful Carlow would be very competitive in division 4 next year and would be aiming to get out of it.”

To hear the full interview tune into the Across the Four Lakes Podcast on Spotify, Apple Podcasts and other platforms, and also here.