CARLOW Under 20 footballers face a formidable task when they travel to the Faithful Fields to take on the reigning All-Ireland champions in their own back yard on Thursday evening.

Offaly have a game under their belts already having beaten Louth by 3-7 to 0-13 in their opening defence of their crown last week and Carlow manager Maurice Browne was there to see it, and he was suitably impressed.

“They are not All-Ireland champions for nothing. Seven or eight lads are still there and they have a few lads who didn’t play against Louth who still have to come back into it. They are a good outfit. They got three goals and are dangerous in the forwards,” said the Carlow manager.

Yet Carlow will be going into this one with a degree of confidence after a promising build up to the Chmapionship. They beat Waterford and Tipperary in the group stage of the Andrew Corden Cup before beating Wexford in the final to lift the trophy named in honour of the former Carlow star. 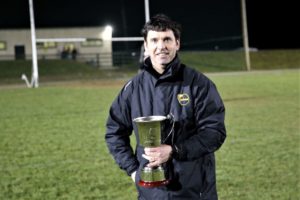 Carlow U20 football manager Maurice Browne with the Andrew Corden Cup after the team’s win over Wexford, he is looking forward to seeing his team in Championship action on Thursday in Offaly
Photo: Pat Ahern

“We are looking forward to the first round. A lot of work has been done. We have a good set-up and the lads are enjoying it. We have a bit of confidence having won the Andrew Corden Cup. We will take that into Offaly on Thursday,” Browne promised.

“We will respect Offaly but the main thing is to perform up to the level we can. If we do, we will be in with a great shout.”

A number of players are either involved with either the senior hurling and football squads.

“Tom Mullally the hurling and Niall Carew the football manager,  have been very helpful.  There has been a crossover.  We have let them play with the seniors and in fairness, if they have a game coming up, they don’t do that much in training.”

Browne is not disappointed that the game is not going ahead in Tullamore. Instead it is going to the Offaly Training Centre.

“They have a fine set up and we have no issue playing over there.”