THE Joe McDonagh Cup competition holds a myriad of contrasting memories  for Carlow. They won the inaugural competition in 2018 beating Westmeath by 2-26 to 1-14 in the final but there have been devastating reverses since. None more so than in 2020 when they were within grasping distance of a place in the final in Croke Park but Kerry hit them late to win 2-22 to 1-23 in Tralee. The following year the structure of the competition was changed. Instead of one group Carlow were drawn against Kildare and Westmeath. They just about beat the Lilywhites but came a cropper against Westmeath, losing by 0-23 to 0-18 away from home.

Marty Kavanagh missed that historic 2018 victory as he had gone to America for the summer. The streaming service was not accessible to him in America that day and all through the match he texted and phoned relatives at home who kept him informed. Despite the pain of not being involved then he still would go to America again. 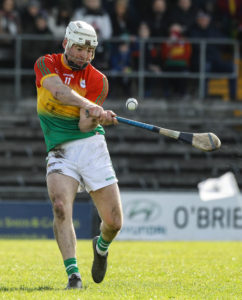 “I would like to have been a part of it.  I would have loved to but if I had to do it again I would. You don’t get these chances too often,” he says.

He is hoping to go to America in the summer. This time the McDonagh Cup would be over so he is available to Carlow at the moment and until the scheduled end of the competition when the final is played on 4 June.

“Nothing booked but that is the plan,’ he says.

At the moment he is enjoying his hurling.

“Things are going well. Numbers in training has been going well. Everyone is looking forward to the weekend,” he points out.

-Meath in Navan on Saturday, just a few weeks after recording a National League win there that relegated the Royals, will provide the first test.

“It is going to be tough. Especially up there. We got over the line a few weeks ago in the league. We know what to expect.  It is vital we get off to a winning start in the Joe McDonagh,” states Marty, who knows only too well the margin between victory and defeat.

“All the teams are very competitive and it will be all on the day. We could have been in a final but we lost down in Kerry by a couple of points. It could go down to the wire again and hopefully we come out of the group stages. We are only looking at one game at  a time and no further than that.”

The competition will be played on a round robin basis with the top two teams progressing to the final, which will be played in Croke Park as a curtain raiser to the Leinster Senior Hurling final.

Carlow v Down – Saturday 14 May

Elsewhere in the competition this weekend, the two pre-competition favourites meet when Antrim host Offaly in what could prove to be a hugely important game by the end of the group stage and Kerry meet Down.