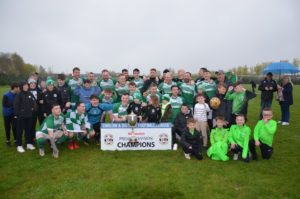 They did so without kicking a ball after they claimed the points when Dolmen Celtic couldn’t field a team but in reality the hard work had been done earlier in the season. New Oak have dropped just two points all season and it’s only been a matter of when they would get their hands on the trophy since they convincingly beat closest rivals Crettyard three weeks ago.

It’s the second trophy of the season for New Oak having already won the inaugural KCLR Shield but they are by no means finished and once the celebrations die down their attention will quickly turn to three more cup competitions.

They are in the latter stages of the two local Carlow cups and they will be hard to beat as they eye a domestic quadruple but they also have an eye on a provincial trophy as well. Next Sunday, they have home advantage for a mouth-watering LFA Junior Cup quarter-final against Kilkenny side Freebooters.

Full coverage of their latest trophy success will be in Tuesday’s edition of The Nationalist.