AFTER a convincing win over Meath in Navan in the opening round of the McDonagh Cup last Saturday, players and manager alike expressed their satisfaction with the performance. That was as far as they were willing to take it. They know one performance and one win only takes a team so far and with Kerry due to visit Netwatch Cullen Park on Saturday for Round 2 (1pm throw in) there is no time to rest on their laurels. 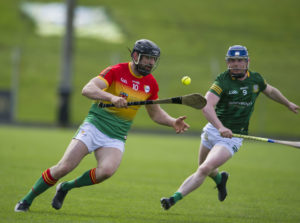 “We are happy. Just stating facts. We came and asked lads to take responsibility for this competition. I think they started well and showed that. We got off to a good start and that generated a bit of momentum for us,” said manager, Tom Mullally who reflected on the good and bad moments in the league.

“Players took things on. We tried things in the league which didn’t work for us. We try to learn as we are going along. This is a new competition. We came, we wanted to bring ourselves to it and we did that. Small things cost us the league as well. Any time we executed the basic skills well, we are doing ok.”

The game was over at half-time with Carlow ahead by 2-15 to 0-10. At that point, Carlow needed to be honest with themselves and continue to practice the basics. Mullally alluded to this.

“With the scoreline in our favour, we cannot afford to leave minutes behind us. There are big challenges coming at us. Today was the biggest challenge we faced all year in getting ourselves right. We have dealt with that and now we have to prepare for next weekend.”

Michael Doyle, the Carlow captain, was surprised with the ease of victory.

“We came up for two points. It ended up being a bit looser than we thought it would be,” he conceded.

On the day few teams in the division would have stayed with the winners here.

The full-back line didn’t concede a goal. At times all three had to either get in a tackle or outrun their opponents. From a standing start, Doyle must be one of the fastest defenders in the country. His style compliments bigger men in the last line of the Carlow defence.

“Conor (Lawler) is very hard to get around. His physical presence. He is good to have that kind of person there to bully a full-forward. Paul (Doyle) is very experienced.  A very sticky hurler. We are very pleased not to concede a goal today.”