Carlow’s out to break Louth’s Harte

IF the league tables are anything to go by then there is only one team below Carlow in the national rankings. Having beaten Waterford at home in the league the Barrowsiders are the 31st best county in Ireland.

Yet the championship brings hope and optimism to every team and Carlow is no exception. Despite the results, the Carlow manager is looking forward to their clash with Louth in Navan on Sunday (2pm throw in). 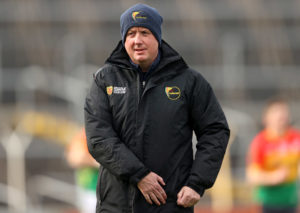 “No matter what,  whether it is club or county, it is special. It will bring out the best and the worst in lads,” predicted Niall Carew.

“We are really looking forward to it. Apart from the Sligo match, I was very happy with the league in terms of how competitive we were. We blooded about fifteen players, fifteen plus I would say which is unheard of. That can only stand to them going forward.”

Carlow and Louth last met in June 2021 in the league at Netwatch Cullen Park when the Wee County won easily to clinch promotion to Division 3. A 1-23 to 1-15 margin was as convincing at the scoreline suggests. Under Mickey Harte, Louth continued on the up and won promotion out of Division 3 this year. Their stock is high.

“Mickey Harte’s record speaks for itself. He is an absolute gentleman. He doesn’t have to prove himself with any other county,” says Carew.

“If you look at Louth in the league and their record, they have been up and down like a yo-yo. Will they stay there now. They could with Mickey Harte.”

And what about the championship?

“I would say they are quietly confident of getting a massive run in Leinster. It is our job to stop that. They are a good team and Mickey Harte has done a great job.

“Look, we will worry about ourselves, try to get the best out of ourselves and see where that will take us,” stresses Carew.

“We have a fair handle where we are at. Louth are getting better and better. They are in Division 2 now. There is great noise about them. Rightly so. They have produced the results. We know the task which is in front of us. We feel, if we put in a massive performance which is in our locker then,  we won’t be far away.”

He echoes the comments of his manager, Niall Carew, and opines that the championship will bring more out of them. He doesn’t mind that they have to go to Navan on Sunday. 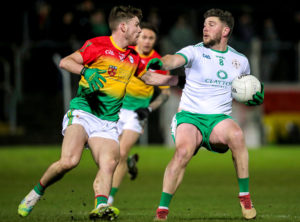 “It will be just as hard whether it is home or away. You enjoy the league but

the championship  is always something you look forward to. Generally the conditions are not against you,” he says.

“There is a good buzz around the training. I know we got nothing out of the league but these lads are coming through.”

Moore played against Sam Mulroy in the club championship this year when Rathvilly were well-beaten (2-15 to 1-5)  by Naomh Mairtin. He Louth man scored 0-8 that day and five of those points were from frees.

“You can’t afford to be giving away frees because he will slot them. We have to be very disciplined.”

Josh is not in the veteran mode yet but he has been lifted by the number of players who are coming through at the moment. He says one of his own club men has taken his chance well and there are others.

“Dara Curran. He is unbelievable.  Outstanding. He is a credit to himself. He played six out of seven league games. There are a few more there too. Paraic Deering and lads on the under 20s.”

Sunday is approaching. He agrees Carlow are underdogs. How will other teams approach the championship?

“I would be hoping Louth won’t be looking at us and if that is the case I would be hopeful of doing a job on them,” says Moore who won’t be thinking of the losses in the league.

“You would not be looking at the past. You are looking at yourself and trying to gauge yourself against other teams around the country. We are training and working hard just like the other teams so you are hoping you can catch another team on the hop.”

Despite leaking a late goal and amassing 11 wides, Louth held enough in resolve to grind out a two-point win as Raymond McKenna’s first half three-pointer helped maintain a division between the sides. Simon Rea, who is now a Carlow selector, scored a goal towards the end but time ran out for the Barrowsiders.

They hadn’t won a championship game since 2006 and had never beaten Louth in the championship. On that day in 2011, Carlow got the breaks when Louth had a player sent off for a second yellow card and they kept their heads to carve out a victory.

With time running out Louth led by a point but Daniel St Ledger levelled with a free. Then Paul Cashin and John Paul Moore combined to put in Brendan Murphy and the Rathvilly midfielder scored to give Carlow a shock win.

The Barrowsiders trailed for long spells of this game but goals from Darragh O’Brien and Chris Blake left only two points in it with eight minutes to go. Carlow poured forward but at the other end, Ryan Burns and Anthony Williams both found the Carlow net to end the game as a contest. Paul Broderick converted a late penalty for Carlow.

In a tight first half, Eoghan Ruth’s point before half-time gave Carlow the lead for the first time and they never looked back in the second half. Diarmuid Walshe scored the first Carlow goal and Paul Broderick added a second to bring his total to 1-8 over the course of the game. It was as easy as the scoreline suggested at the end.