LOSING to Kerry is not any source of embarrassment but it was the manner of Carlow’s performance during last Saturday’s defeat to Kerry in Netwatch Cullen Park that had Carlow manager Tom Mullally using such drastic language. 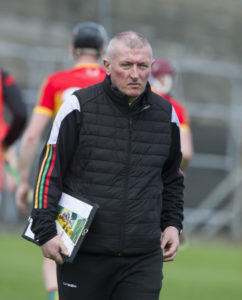 The Kilkenny man was clearly mystified by the paucity of his team’s effort. He said he was unable to explain what happened.

“We are probably kind of embarrassed more than anything else. It was that kind of performance. On the back of last weekend you would have hoped there would be an upward lift in relation to things but you can only pick out one or two people there who came anyway close to the form which they are capable.

We can’t change the result now but embarrassing is probably the best description,” he said.

There were really no positives. From start to finish, Carlow struggled.

“In the first half we were very disorganised and all over the place. We seem to be apportioning blame everywhere. When things go wrong that is what happens. That is why the challenge is to turn up and we definitely didn’t do that today.

We did ok but the first goal really killed us. Individual mistakes cost us. We served our time during the league and we hoped the Joe Mc would show that work. We are disappointed. Yeah. Definitely.”

He said he was unable to explain the reasons for the no-show. He hopes this was just one of those days which every team has occasionally. Antrim next week in Corrigan Park at 12.30pm will be a massive test of character.

“I am making the assumption last week is truer to form. If not, I might as well pack my bags and go home. I am hoping that today was one of those days. Next week we have an early throw-in and so we will have to be tuned in and ready to go. It will be a huge challenge.”