Issues must be addressed for Carlow to move forward

IN the aftermath of last Sunday’s Leinster Championship defeat to Louth, Carlow manager Niall Carew and team captain Darragh Foley spoke about some of the issues they feel are hindering Carlow GAA at the moment.

The structure of competitions in Carlow and the lack of physicality in players are a couple of points highlighted. The pair had just witnessed a game Carlow effort but it was never going to be enough to beat Louth or even come close to them as the Division 4 side conceded five goals over the 70 minutes.

“Certainly we are playing catch-up when players come in in terms of their physicality,” said the Carlow manager.

“Their strength is way off and we are playing catch-up in that area. Certainly for me we will have to up that going forward. I have no control over that and it is a conversation we will be having with the County Board,” Carew confirmed.

Daragh Foley was distraught after the game.

“It is a very tough one. You build yourself up coming into a game believing you have a great chance. We conceded two soft goals in the first half. Without conceding them it would have been only 0-6 to 0-5. We came out in the second half and conceded more. Heads dropped. A difficult, difficult day,” he stated. 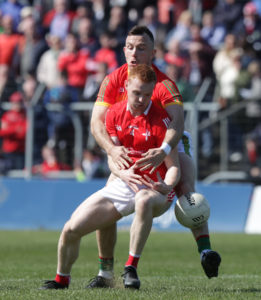 Louth attacked the Carlow kick-out and much ball was coughed up as the red pressure came on. Foley saw this close-hand.

“Kickouts are a huge part of the game where you retain possession. We have lost a lot of size over the last 12-18 months. It is very hard to replace that. That was the main strength in how we played football. Whereas now we are lacking size. It is tough. Very tough. Frustrated. It is hard when you are committing and doing your level best to compete.

“Louth are streets ahead of us. Mickey Harte is a big name but in fairness to Niall (Carew) and our management team they are doing the utmost for us to compete. They are meeting road-blocks upon road-blocks. Until we really look at everything internally this is a vicious cycle at the moment. The lads in there-. you couldn’t meet a better group who want to listen, train and learn. Unfortunately, we have too many lads who are learning at the one time. It is getting harder and harder.”

The Kilbride man called for the County Board to review the whole structure.

“We have to look at developing senior players. We have to look at bringing back promotion and relegation in the leagues. Lads are not getting enough game time at club level. You go to a league game and it doesn’t matter whether there is promotion or relegation. It is a micky-mouse practice game. You need more competitive games,” Foley stressed.

strength and conditioning. He also said the dual mandate from the clubs is hurting both games.

“Lads are doing their best but unless they get buy-in from everyone, we are just going to fall farther and farther behind. Intercounty football-you can see where it has gone to.

“Louth don’t really focus on hurling. We are trying to go dual. Unfortunately the hurlers are not going well. It is like we are banging our heads against a wall.

When does it stop? When does someone say Lads, listen-let’s look at this,” asked Foley.

Carlow County Board Chairman, Jim Bolger, said moves are afoot to make changes. Particularly in relation to strength and conditioning.

“At present we have started a review in relation to  coaching and games development in the county.  We are hoping he will be able to highlight areas which we will be able to improve on. Somehow along the line we are missing a trick and it is not manifesting on the pitch. We have to look,” agreed Bolger.

He acknowledged the structure of the league competitions needs to be examined but he pointed out this is what the clubs have voted for in the past.

“We brought it up with the clubs this year and we tossed it around in a big way.”

Bolger does have a proposal which could give all players  opportunities to play senior football against the best teams.

“We are looking at options for junior and intermediate clubs to have area teams. We are looking at exploring that. We have discussed it to give more bite to the leagues. We have discussed the practicalities of it. The clubs decided not to have promotion and relegation. We are open to proposals for area teams. It gives players who have played junior and intermediate grade an opportunity to play senior.”