WHAT a season it’s been for Gavin Dowling’s New Oak Boys side. They finished their Nationalist Premier League season without, dropping points in just two games along the way. Added to that, they won the KCLR Carlow Shield tournament, have secured their place in Keating Memorial Premier Cup final and are 90 minutes away from a second local cup final appearance in the Douglas Jewellers Carlow Cup Final. 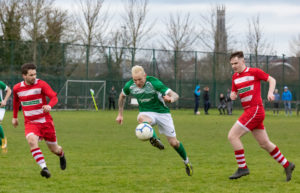 However, this week they are looking outside the county and they are eyeing up clinching a place in the Leinster Junior Cup final. And whilst they will have their eyes on a unprecedented domestic quadruple, they won’t overlook the chance to add a fifth trophy to a potentially incredible quintuple.

On Sunday, though, they face their toughest game of the season, away against Wexford’s North End United, the reigning champions, in the Leinster Junior Cup semi-final.

New Oak booked their place in the last four with a thrilling penalty shoot-out win in the quarter-finals against Kilkenny’s Freebooters and on the back of that, New Oak manager Dowling says that the mood, and fitness, is good in the camp right now.

“We have had one or two injuries since last Sunday but the mood is very good. The boys are recovering well, they’re using the Recovery Hub in Carlow, and between the training sessions being light and having a week off to prepare for this game, they’ve had a good recovery this week. The lads are buzzing for it, they’re looking forward to it, I don’t think it can come quick enough for the players, they were all happy enough at training. They’re moving well, well except for the two that are injured, nobody is complaining of tiredness at all, they’re looking forward to the matches because at this stage every match we play is either a semi-final or a final, it’s the enjoyable part of the season. Confidence is up, we’ve gone this far unbeaten so it would want to be up. If we had everyone I’d be a little more confident but you have to make do with what you have.”

However, he is aware of the threat that North End pose. Earlier this month, they lost 3-1 to Salthill Devon in the quarter-final of the FAI Junior Cup and they well used to, and comfortable, playing against the best junior teams in the country.

“Like I said after the Freebooters game, I’d class North End as one of the best junior sides in the country so it’s not going to be an easy game at all, they’re a really tough side. Yeah definitely [it’s our biggest game of the season], apart from the Evergreen match [in the FAI Junior Cup] and Freebooters but this is going to be another step up for definite I think, North End will be very good. Home advantage is huge, we’ve had home advantage a lot this season and it works well for Junior sides, especially a team like North End, they’ll be very strong down there. It would be lovely to reach a Leinster final, that would be amazing for the team.”

Dowling has to plan without regular goalkeeper Kelan Gaffney, who is suspended after being sent off in the last round, and has a couple of other injury doubts, including former Carlow GAA star Paul Broderick

“Paul [Broderick] is struggling with an achilles injury, Kelan [Gaffney] is suspended, James [McGrath] has a knock, that’s why we took him off against Cretty. He will more than likely make it but I’m not 100% sure yet, it’s up in the air, he’s a top midfielder and has brought a lot to the team. It [Gaffney’s suspension] will obviously be playing on the players’ minds because they have so much faith in him. I’d rate him as the best ‘keeper in the league, he’d be a loss to any side, he’d be a loss to an Oscar Traynor side if we had one, he’s that good. We can defend really well though, we defended well against Freebooters, we defended well against Cretty for most of the games this season, if we can do that again, hopefully we won’t be relying on the ‘keeper to do a whole lot. We have young Sean Geoghean available to us, he’s been training with us so he’s an option, he was one of the best players on the pitch when he played against Cretty earlier in the season so he’s capable. We have had strength in depth this season, we have lost a little bit of that with Paul and maybe James but we still have a few young lads to bring in if we need them. I have Daniel Hayden available, he’s a pretty good young player, you’ve seen what Jamie Murphy can do, he’s a lovely little player, Dotsy [David O’Shea, captain and long-term absentee] is struggling to get back fit but he’s working away and if there’s ever a day when you need him, he’d still get in there and play his heart out, if I need him he’s there.”

The game takes place on Sunday in Hollygrove, Wexford and kicks off at 2pm.