THE return of the Triton Showers-backed Motorsport Ireland National Rally Championship to Carlow on Sunday next after a lapse of six years is greeted by a capacity entry of 150 crews with no fewer than another 55 crews on a reserve list – illustrating the huge popularity of the eight-round series.  The top Carlow driver is Bilboa man David Condell (Ford Escort). He always figures prominently in the Modified category and actually won the rally in 2017. 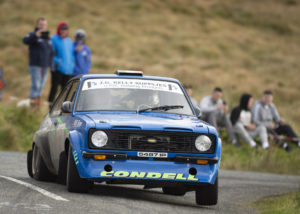 The Sheehy Motor Group Carlow Rally is organised by the Carlow Motor Club with Brendan Harpur as the clerk of the course.  He told the Carlow Nationalist, “Firstly, it’s great to be back in the national rally championship.  As a counting round of the Triton Showers backed series, it’s a great boost, not just for our club but also the general Carlow area.  The entry is over-subscribed and that brings its own problems as we can only accommodate 150 crews, so unfortunately, many crews will be disappointed. Indeed, it was a monumental task to complete the seeded list.”.  He added, “All accommodation in Carlow is completely booked out for the weekend and I know we have drivers, co-drivers and their service crews staying as far away as Kilkenny, Wexford, Athy and Portlaoise, all of which is a boost to the economy of all those regions.”

Given the quality of the entry, interest is very high as he explained.  “When we posted the seeded list on our social media platforms, we had 25,000 hits within two hours.  It is essential that all the spectators coming to watch the event to get the vantage points early, obey the marshals and heed their advice. We want everyone to enjoy their time in Carlow and return home safely.”

The event that will consist of two stages repeated three times, marks the mid-point of the series where reigning champion Monaghan’s Josh Moffett remains unbeaten following start to finish victories in Mayo, Birr and Monaghan. 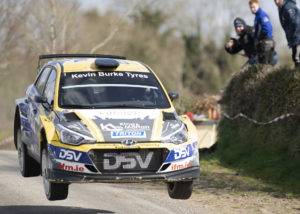 Winner of the last rally (in 2018) that was organised by the Carlow Motor Club, Ryan Loughran (Ford Escort) will have the number one decals on the doors of his Mk. 2 Ford Escort.   However, Moffett in his Hyundai i20 R5, will run first on the road as he continues his quest to claim the magnificent Vard Memorial Trophy.

With the best six scores to count, Moffett’s immediate title protagonists Armagh’s Darren Gass and Dubliner Robert Barrable are still very much in the equation, however, they need to stop Moffett’s winning streak.  Both are still on a learning curve with Gass adapting to his Citroen C3 and Barrable getting to know his VW Polo GTi R5.  Last time out (Monaghan) Gass finished third behind the Moffett brothers Josh and Sam with Josh taking maximum points (21 including a point for the best time on the Power Stage) while Barrable was fourth – he was third until a puncture cost him time. 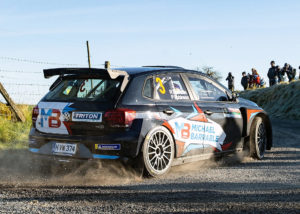 While Gass has competed in all three rounds to date and is second in the series – 14 points behind Moffett, Barrable is 28 points off top spot.   “Unfortunately, I had to skip the Birr Rally but with the best six from eight scores to count, there’s a long way to go yet.  I think it will take me a bit longer to get up to speed in the VW Polo.  It was always going to be difficult in Monaghan, Josh (Moffett) has great pace this year and it was his home event.  Now, that it’s out of the way I am looking forward to the rest of the championship including Sunday in Carlow.”

Former triple national champion Donegal’s Declan Boyle will campaign his Ford Fiesta WRC, he missed the opening round and was second in Birr but problems in Monaghan meant he missed out on the major points, essentially, he cannot afford any non-finishes to ensure he stays in the mix.

Glengormley’s Derek McGarrity will pilot a VW Polo GTi R5 and is unlikely to register for the series.  Meath’s Tim McNulty, who made a return to rallying earlier this year and who won the national series in 2011, will campaign his right hand drive Ford Fiesta R5.  As he aims to move into the top four in the series, he’s acknowledged that the pace at the top is at a very high level.  Another former champion Peadar Hurson (Ford Fiesta WRC) makes his first appearance in this year’s championship and it will be interesting to see his turn of pace.

Louth’s Brendan Cumiskey (VW Polo GTi R5) and Maynooth’s Paul Barrett (Ford Fiesta R5) complete the top ten, the latter secured his best finish of the season (seventh) in Monaghan where he gained in confidence on each successive stage following his crash in the previous round in Birr.

Dubliner Aaron MacHale, who won the national series in 2007 that included the Carlow Rally, makes a return to sport after an absence of some three years, on Sunday, he will debut a right hand drive VW Polo GTi R5, his performance will be watched with interest. Cork’s Cal McCarthy (Citroen DS3 R5) is seeded behind MacHale, ironically, in the car previously owned by MacHale.

Kiernan leads the Mk. II Trophy section of the Triton Showers-backed Motorsport Ireland National Rally Championship, currently, he is a point ahead of Monaghan’s Arthur Kierans with Limerick’s Ed O’Callaghan three points further behind in third.

The event incorporates the Carlow Mk. II Challenge and along with the aforementioned, the likes of Carlow’s David Condell, Monaghan’s Gary McPhillips, Cavan duo Jonny Pringle and Chris Armstrong, Tyrone’s Frank Kelly, Donegal’s JF Shovelin and Tyrone’s Adrian Hetherington, will all be seeking victory in this category.

Armagh’s Jason Black and Donegal’s Declan Gallagher, both in Toyota Starlets should have an interesting battle and along with Donegal’s Kevin Gallagher (Darrian T90 GTR) all are aiming to dominate the two wheel drive category.

One interesting entry is that of English driver Jim Harrison, the Macclesfield driver, who last competed in Carlow in 2007, won several Irish national rallies from 2002 to 2007.  He will campaign a Skoda Fabia R5 and will be co-driven by Limerick’s Anthony Nestor, who competed with him in Carlow in 2004 – finishing fourth overall.

The first of the day’s six stages gets underway at 10.00am.