CARLOW Lawn Tennis Club will contest the Leinster Regional  Spring League Division 3 Ladies Dublin final in Naas on Sunday. The four lady team qualified for the decider when they recorded a thrilling 3-1 win over Hillbrook Tennis Club from Enniscorthy on Sunday in Carlow.

They did it the hard way losing an exciting and high quality top match when Deirdre Murphy and Deirdre Collins went down to Tracey Carrick and Jacinta Doyle Sommers. All was not lost as Sinead Doyle and Bernie Morrissey levelled matters when winning their contest on the adjoining court. 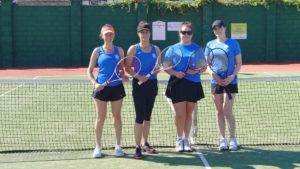 It couldn’t have been tighter going into the next round of matches but Carlow came out fighting winning both matches which removed the need for a championship play-off.

Deirdre Murphy, who captained the side, said they embraced the challenge as they went into the second series of games. They were not deflated after losing the top game.

“No! It was a fresh start and gave us the opportunity to go again,” Murphy said.

“Bernie (Morrissey) and Sinead had done  well in their game winning one of their sets to love so we were confident we could improve and play as well as we can.”

21 clubs from all over Leinster (excluding Dublin) entered 64 teams to compete in four men’s and three ladies divisions. Carlow came through the group stages beating Kilcullen and Prosperous. In the quarter-finals they accounted for Tullow before facing Hillbrook. Now, they will play either Louth or Offaly opposition in the final.

The captain said the team, which has bonded well,  is relatively inexperienced and are thrilled to be in a final.

“It is great. I think most of us are fairly fresh into tennis so we are delighted to be in the final. We gelled well together. We enjoy playing together and play a lot during the week as well,” Murphy acknowledged.