“Do I miss it? I miss aspects of it, certainly.” – Redmond

THE intercounty season is in full swing. Even at this stage the picture is quite clear about who is going to come out of the provinces. Perhaps Derry’s defeat of Tyrone muddies the Ulster picture a little but Kerry, Galway and Dublin look almost certain to emerge from Munster, Connacht and Leinster respectively.

After that the Tailteann Cup draw takes place on Monday.

For one Carlow player in particular there is not quite a sense of relief that he has retired from intercounty football but he is content with the decision he has made.

Tinryland’s, Shane Redmond, now has time to watch the season unfold from the relative comfort of his armchair.

“Do I miss it? I miss aspects of it, certainly. I miss the training. I miss the routine of it. I miss the craic with some very good friends. I miss preparing well and all that goes with that,” he says. 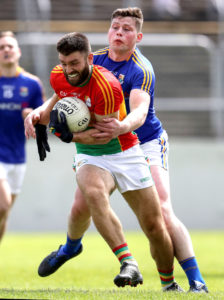 Shane Redmond had a distinguished career in a Carlow jersey
Photo: ©INPHO/Bryan Keane

“I don’t miss the commitment to it. My weekends have been a lot different. The club has been a fair commitment and I have thrown myself into that.

I try not to miss any sessions. I try to approach that with the same approach I gave Carlow.”

He went on to say it was a mistake to make the Tailteann Cup a straight knock-out and that a round-robin competition had the potential to give all counties at least three more games after losing in their provinces.

“There will be eight teams who will lose their first round in the province and lose the first round of the Tailteann Cup,” Redmond reasoned.

He is enjoying the league matches in Carlow with his club at the moment but is worried about the gap between the end of the league and the start of the championship later in the season.

“Tinryland club football is a big commitment and I enjoy everything that goes with that,” he confirmed.

Shane Redmond was speaking to Kieran Murphy on the Four Lakes Podcast and you can listen to the full interview here.