CLÍODHNA Nolan, the Leighlinbridge native and former Carlow Rowing Club athlete received one of the biggest honours a rower can receive, in having a rowing boat named in her honour at the NUI Galway Boat Christening Ceremony in the university grounds. 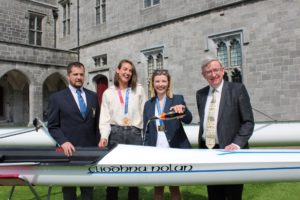 The event was to mark the significant contributions made on an international stage by Nolan and the other recipients. The event was addressed by the president of the university President Ciarán Ó hÓgartaigh, who said:

“They are all first-class ambassadors for our University and our values, not least excellence. In many ways, NUI Galway’s success and achievements are made possible thanks to the support, encouragement and endeavours of our students and our alumni.” He went on to say “the boats represent the spirit of the club and the university.”

Nolan was in good company as the other woman having a boat named in honour was 2021 Olympic medallist Fiona Murtagh, while Clíodhna’s achievement in winning a gold medal at the European U23 championships received high praise. Nolan is just back from winning at the Intervarsity regatta at Lough Rynn in Leitrim, in the double sculls event. In fact, Carlow Rowing Club is very well represented in Galway rowing as Clíodhna’s brother Oisín is the coach of the novice crews in NUIG and were also successful as at Intervarsity’s, while another Carlow man Sean Byrne is club captain and coaching in NUIG and at the famous ‘Bish’ rowing club in Galway. Ciro Prisco, Head Coach of NUI Galway Rowing, said: “our student athletes bring international successes while they fully embody the values of our club and stand as role models for other students and athletes.”