CARLOW manager Tom Mullally has named a strong team for this afternoon’s McDonagh Cup tie against Down in Netwatch Cullen Park.

It’s a must-win game for Carlow if they want to remain in the hunt for a place in the final going into the final round next week, as detailed in our match preview here.

The game throws in at 2pm. 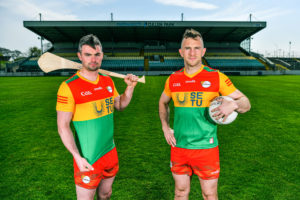 The brand new Carlow GAA jersey, modelled here by senior hurling team goalkeeper Brian Tracey and senior football team captain Darragh Foley, will be worn for the first time in the McDonagh Cup game between Carlow and Down