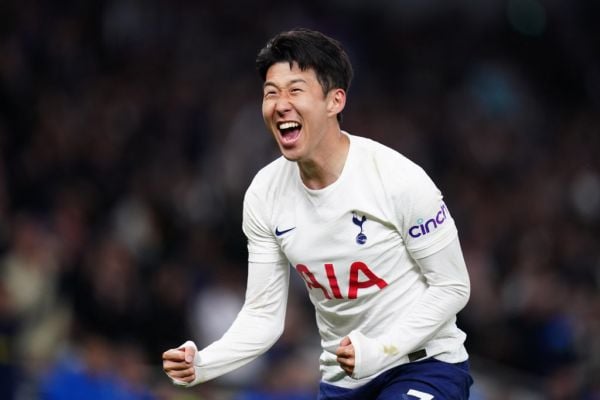 Tottenham star Son Heung-min says he would give up winning the Premier League Golden Boot in order for his side to qualify for the Champions League next season.

The South Korean is enjoying his best-ever campaign and scored his 21st league goal in Spurs’ 3-0 victory over Arsenal on Thursday night.

He is just one behind Liverpool’s Mohamed Salah in the race for the Golden Boot and is the form player, having scored 10 times in his last eight games.

That form has helped fire Spurs into top-four contention with two games of the season to go, but Son would give it all up if it meant his side earned Champions League qualification.

Asked if he would trade scoring any more goals for a top-four spot, he said: “Yeah, 100 per cent.

“Obviously it’s a good thing that you are racing, but I have said a few times that it is important to finish in the top four (more) than anything else.

“It would be nice but for us it is important to finish in the top four.”

The race for the top four is blown wide open 👀#TOTARS pic.twitter.com/VrduUcyAwT

Son was taken off in the second half of the derby rout, much to his displeasure.

Boss Antonio Conte claimed that Son promised he will score in Sunday’s clash with Burnley, which kicks off at 12pm, something the 29-year-old hopes to deliver.

“I am always not happy at coming off because I want to be on the pitch because I love playing football and I want to help the team,” he said.

“I can understand afterwards but at the moment you are not angry but frustrated because you are passionate on the pitch.

“To be honest looking at the schedule it is madness. We are playing Thursday night and Sunday with a really early kick-off.

“It is a really quick turn, we need to do everything to recover, good food, good sleep, this is the more important and then get ready to go again.

“It would always be good to have a night kick-off, but if you win the early kick-off it is always good.

“It feels like you wake up and you go to play the game. Especially Thursday to Sunday is a really quick turn. But this is the schedule, we can’t change it and we need to be ready for every situation which we will do.”