IT’S all on the line as Carlow travel to Tullamore on Saturday to take on Offaly in the final round of the McDonagh Cup this Saturday afternoon.

Defeat, or a draw, will mean the end of the season for Tom Mullally’s team but a win, provided Kerry don’t win away to Antrim, will qualify them for the final in Croke Park on 4 June.

It’s a big prize to play for and Mullally is delighted that his team have bounced back from some earlier defeats to give themselves a fighting chance.

Carlow beat Meath in the opening round before losing two in row, a woeful home defeat to Kerry before a much battling effort on the road against Antrim.

They hauled themselves back into contention with a hard fought win over Down last weekend in Netwatch Cullen Park. 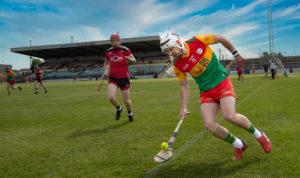 Carlow’s Chris Nolan attempts to keep the sliotar in play during last Saturday’s win over Down  Photo: michaelorourkephotography.ie

It is that defeat against Kerry, not so much the result but more the manner of it still annoys Mullally. The 15 point margin that day could yet come back to haunt Carlow if they miss out on the final by score difference but there will be plenty of time in the long winter months ahead to ponder on that result if things don’t go Carlow’s way, for now all the focus is on producing their best performance of the season in Tullamore on Saturday.

“It will be a big challenge and it is where we want to be,” said Mullally after last weekend’s win over Down.

“It is a group which is developing. That is what we want. The Kerry match for us was most disappointing but the Antrim match, we went up which was great but we didn’t know how to win the game. When it came down to the last three or four minutes, we had been great for the previous 65 minutes but when it came to that we didn’t do it. I think when Down got it back to two points, we answered that and showed the lessons of the Kerry and Antrim games had been learned,” added Mullally.

Marty Kavanagh scored 1-13 in the win over Down, and is within touching distance of Pat Coady’s all-time scoring record for Carlow heading into Saturday’s game, but he knows Carlow will face their toughest test of the season in Tullamore.

“It is a huge challenge. Offaly are playing in the top division in the league. Michael Fennelly is doing great things with them. They are a really good side. We are going to be up against it but we are looking at it as a semi-final and are hoping to get the win. We will see where we are then and we are glad to bring it to the last game.”