ED Byrne will captain the Leinster Rugby team, as sponsored by Bank of Ireland, as they take on Munster Rugby at Aviva Stadium tomorrow in the final URC regular season game (KO 7.15pm – LIVE on TG4, Premier Sports and URC TV).

The Carlow man is joined in the front row by Seán Cronin and Thomas Clarkson. 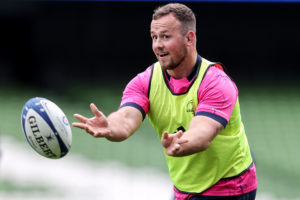 Head coach Leo Cullen will be pleased to welcome back Jordan Larmour and Ryan Baird from injury, both will start.

Larmour slots in at full-back with Rob Russell on his right and Rory O’Loughlin on his left.

The now-familiar pairing of Ciarán Frawley and Jamie Osborne are together in midfield again while there’s a first home start for Cormac Foley at scrum-half where he has Harry Byrne outside him.

Joe McCarthy and Josh Murphy are the locks with the returning Baird, Scott Penny and Max Deegan completing the starting XV.
On the bench, there’s a potential debut for scrum-half Ben Murphy.

After being introduced to the game by Seapoint RC, Murphy later attended Presentation College Bray where he joined up with the school’s teams.

Before joining the Leinster Rugby Academy, his playing days continued post-school with Clontarf FC and Old Wesley RFC while he spent some time with this weekend’s opponents on a short-term contract in late-2020.

He also once acted as mascot for a meeting with Edinburgh Rugby at the RDS in 2007 on a day where current senior team coach Felipe Contepomi was captain.

Elsewhere, Tom Daly will take up his usual position of centre as Connacht finish their season against Zebre Parma tomorrow at the Sportsground at 5pm.