As Marty Kavanagh closes in  as Carlow’s   leading inter county scorer of all time , Pat Coady, who currently holds the record says he is proud to be able to hand over to his own club man, when talking on the Four Lakes Podcast.

Coady also speaks about his club’s arch rivals,  Mt Leinster Rangers, who have set the bar high not just in  club hurling in the county but at national level too.

“We know the level of hurling Rangers are capable of.” 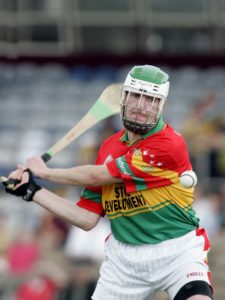 Coady recalls a golf game where another St Mullins club man, the great Liamy Walsh, wouldn’t talk to him because of his refusal to take on a risk and reward shot.

Pat is a man who has been at the coalface in difficult times for club and county but who has also been there for the glory years as well.

You can listen to the full conversation with Kieran Murphy and Pat Coady on the Four Lakes Podcast.