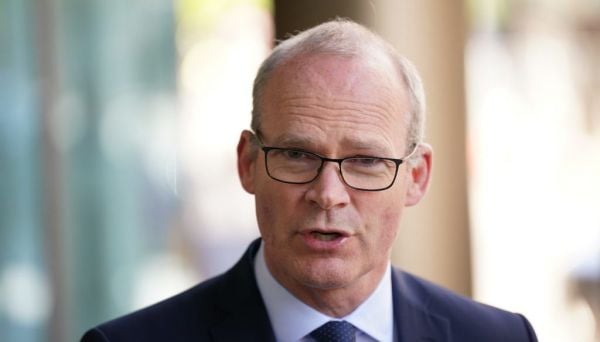 The Minister for Foreign Affairs said he has “made clear” to British foreign secretary Liz Truss that the Irish Government opposes the UK breaching international law.

Simon Coveney made the comment following his meeting with Ms Truss on Friday about ongoing concerns around the Northern Ireland Protocol.

His meeting with his British counterpart comes as Taoiseach Micheál Martin travelled to Belfast to meet with Northern Ireland party leaders amid ongoing deadlock at Stormont over the post-Brexit trading arrangements.

Following his meeting with Ms Truss, the Fine Gael minister tweeted: “I made clear Ireland’s opposition to the UK breaching international law.

I met my German counterpart @ABaerbock in Turin. I thanked her for her statements & that of the Chancellor, standing up for international law & the #Brexit deal.
The EU is ready to find solutions in response to the concerns of Unionism in NI but needs a partner at the table. pic.twitter.com/WFYhlftnvc

“The UK needs to get back to talks with the EU.”

His visit comes in the wake of the UK Government’s controversial move to act unilaterally to scrap parts of the protocol.

Ms Truss announced plans to legislate to override parts of the Brexit withdrawal treaty it struck with the EU.

The DUP is currently blocking the re-establishment of Stormont’s powersharing institutions in protest at the protocol, which has created economic barriers on trade between Great Britain and Northern Ireland.

“I thanked her for her statements and that of the Chancellor, standing up for international law and the Brexit deal,” Mr Coveney said following his meeting.

“The EU is ready to find solutions in response to the concerns of Unionism in NI but needs a partner at the table.”