ONLY 90 minutes and an ageing Slaney Rovers side now stand between New Oak and history, as they hope to clinch an unprecedented quadruple and pick up a clean sweep of Carlow League trophies on Saturday night in Killeshin in the Douglas Jewellers Carlow Cup final. Games between the two sides have been close this season, They first met back in November in the league and New Oak came away with a 2-1 win, with goalkeeper Kelan Gaffney making a last gasp save to keep his side ahead. They met in the KCLR Carlow Shield final in January and New Oak came out 3-1 winners with a further clash at the end of January in the league saw New Oak emerge as 5-0 winners. Slaney have had a difficult season, ending in 6th place and struggling at times, New Oak have been flying and have won everything in Carlow to date. Slaney will be hoping to produce what would be a huge upset this weekend as they try and stop New Oak from making history as the first side in Carlow to ever win all four Premier trophies available to them. 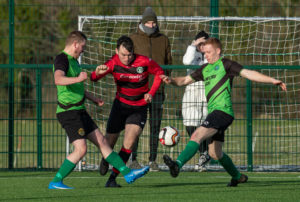 Slaney manager Peter Kehoe has full respect for their opponents this weekend and knows the seismic task that awaits them on Saturday night but insists his side will relish their underdog status and will not be lying down. “It’s a massive, massive task in store, we’re tipping away, we’ve been finished for a few weeks whereas New Oak have been playing and we’ve been sitting watching. You can’t beat matches with training, trying to get lads to come training when there’s nothing on and GAA has kicked back in is really hard. Whereas New Oak are playing and every game is a semi-final or a final so it’s easy to keep lads interested so it’s easy to keep ticking over instead of just training where you might have 9 or 10 instead of a full panel of 15/16. New Oak are a beast, they’re going so well so it’s going to be hard to take them down but we’re in a final and it’s all on the day after all. We’re underdogs but we won’t be lying down at all. “

Kehoe acknowledges that it’s been a difficult season but that they will give it their all. “We have had a difficult season because Covid put a huge dent in us. Three years ago, before it hit, we were top of the league when it stopped, although Crettyard and New Oak had a couple of games in hand on us but for us in our first season in the Premier to be leading the league with two or three games to go was huge and we were looking forward to the next season. Then Covid hit and my 33 year old players are all 36 year olds now and so we’re an ageing side. Saturday night is going to put 4 or 5 lads into retirement. We’re definitely up for it though, we have plans and ideas, I think if you’re going to play New Oak you need to have plans and formations to stop them, we are good against the bigger sides, the more underdog we are the better we play and it’s almost like with the weaker sides that we don’t give them enough credit. I am using the idea of stopping New Oak doing the clean sweep as a motive for the lads to drive them on, especially because I feel like the whole of Carlow will be behind us, Crettyard in particular because they won’t’ want to see New Oak win everything but look we’ll see where we are on Saturday night come 9pm.”

New Oak manager Gavin Dowling is well aware of the fact that history can be made on Saturday night but insists that for his side, it’s just a cup final and that they will just focus on winning. “ It’s just another cup final to the lads, and it’s always nice to play in a cup final, especially with it being the Carlow Cup final, I always used to love playing in it and I won it a few times too, it’s the big cup in Carlow apart from the league so we should be up for it. We’ll keep that [making history] in the back of our minds and we’ll celebrate that after, if we win the cup but we won’t worry about it until after the game though, it’s just another trophy, we’ll go out and try win another trophy, that’s it.  Looking forward to it. All the boys are in good form and looking forward to it. The boys look confident and they’ve trained well and everyone is looking forward to it, nice to end the season with a Carlow Cup final. Scoring five goals in a cup final should give us a lot of confidence going into the next game.”

He added that the break of nearly a week for the first time in weeks has been of a great help to the side and will only do them good. “We didn’t have a midweek match this week so it’s been a chance to rest for the first time in 5/6 weeks, it’s a lot less taxing than playing Wednesday and then playing Sunday again. We’re slowly getting lads back again too, James [McGrath] should be back, Fester [Lee Walker] should be back, Paul [Broderick] is slowly coming back too, so we’re getting close to having a clean bill of health, apart from the long term injuries we have it’s looking good. Before the North End game, before the Kilree game, I was worried about tiredness coming in but I’ve seen a bounce in the lads step now, they’ve gotten a lot fitter from playing all those midweek games where they were hammering us with fixtures.”